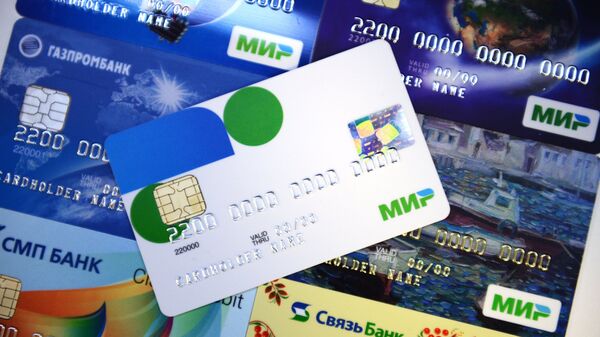 © Sputnik / Alexey Filippov
/
Go to the mediabank
Subscribe
International
India
Africa
Sberbank, Russia's largest bank, is considering selling its shares in the Visa and MasterCard payment systems in 2017, a senior company official has confirmed. Business experts say the move has to do with the completion of Sberbank's integration with a new Russian national payment system, using the 'Mir' payment card.

Earlier this week, Sberbank Deputy Chairman Alexander Morozov confirmed that the company is actively considering selling its shares in Visa and MasterCard next year. "We plan to sell these shares. There is a high probability that these transactions will be completed in 2017, but everything will depend on market conditions," the bank official explained.

Russia's Mir National Payment System to Spread Into Europe
Morozov did not go into detail about the shares of the international payment systems Sberbank has in its possession, but Russian business media have explained that after the companies' entry into the Russian market in 2006 and 2008, banks using the payment system were made to buy shares of the US companies.

Sberbank is Russia's oldest and largest commercial bank, and is controlled by the Russian Central Bank.

The transition to the new payment service was completed last month, with the bank planning to provide 100% acceptance of Mir cards at all its terminals by early next year.

Sberbank first joined Russia's new national payment system in December 2015. Russia was forced to create the system in 2014, after Russian banks facing US and European sanctions began experiencing concerns and problems with Visa and MasterCard, including the threat that Russia may be cut off from the SWIFT system of payments.

16 million Mir payment cards are expected to be issued before the year is out, with up to 45 million more issued in the coming year. According to Expert, "such widespread use of the Mir card will deal a serious blow to Visa and MasterCard's business in Russia. However, this will necessitate increasing the network of banks and ATMs that Mir can be used at. In any case, Mir makes the Russian economy stronger and more resilient against external attacks."

Russia
Cyberattacks Target Five Large Russian Banks
Last week, five of Russia's largest banks, including Sberbank, were targeted by moderate-to-heavy intensity cyberattacks. Sberbank confirmed that it had thwarted a powerful DDoS attack on its servers. The attacks were successfully repulsed.

Global media commenting on the attacks could not help but connect the cyberattacks to US Vice President Joe Biden's public warning that Washington would 'retaliate' in response to unproven allegations that Russia was involved in the campaign to hack the Democratic National Committee this past summer.