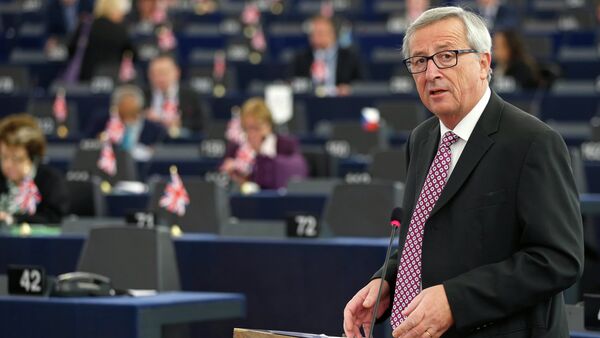 © REUTERS / Vincent Kessler
Subscribe
International
India
Africa
MEPs have criticized the "naive enthusiasm" of the European Commission for effectively "gambling" with EU money without proper oversight saying: "It is unacceptable to tell taxpayers that we have lost money, but we learnt a lot."

European Investment Bank Slammed as Latest Example of Lack of Trust in EU
The stinging criticisms concern the use of "financial instruments" — in the form of loans, guarantees, equity and other "risk-bearing mechanisms" — which are not directly overseen by the EU Court of Auditors (ECA) and which MEPs describe as "unacceptable" and a "black hole" for EU money.

The issue centers on the European Fund for Strategic Investments (EFSI) — part of the "Juncker Plan" (that of European Commission President Jean-Claude Juncker) — to increase investment in the EU. It was hailed as the "roadmap for getting Europe back to work", managed by the European Investment Bank (EIB).

The "financial instruments" — assets that can be traded, cash or otherwise, real or virtual — "aim to put EU funds to good and efficient use, ensuring that grants are complemented by other financial products so that EU funding can be used time and time again in a revolving fashion," according to the European Investment Bank.

​However, the Chair of the European Parliament's Budgetary Control Committee, Ingeborg Grassle, reproached the European Commission over its "naïve enthusiasm" for using such schemes, saying:

"We need to know what has happened and what has not happened with EU money. It is unacceptable to tell taxpayers that we have lost money, but we learned a lot."

ECA President Klaus — Heiner Lehne said that the current challenges facing the EU are greater and more numerous than ever before. While he said that the increased use of financial instruments could contribute to enabling the EU to meet these challenges, he warned of the risks associated with the increasing use of financial instruments not directly audited by the ECA, saying: "We need to be able to ensure that these instruments always function as effectively as they should."

After the EFSI launch, November 2014, it was described by various commentators — including the Brussels-based Bruegel think tank as a "gamble."

"Overall, the adopted Juncker plan relies on some bold assumptions about the EIB's future behavior that seriously look like a leap of faith […] the Commission, by giving the lead role to the EIB, has taken a huge gamble," Gregory Claeys, a Research Fellow at Bruegel blogged.

Welcome @EYnews evaluation of #investEU. It is in line with our new proposal for extension & reinforcement of #EFSI https://t.co/zCBDoMLaup pic.twitter.com/0BKnc5ye2M

​Defending the European Commission, Nicholas Martyn, the Deputy Director-General for Regional and Urban Policy, said that financial instruments were as carefully scrutinized as other operations and that they were "not a black hole where we don't know the risks. We cannot afford not to use financial instruments."