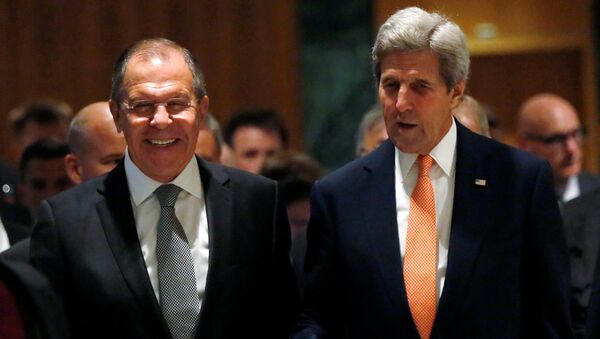 © REUTERS / Kevin Lamarque
Subscribe
Russian Foreign Minister Sergey Lavrov and his US counterpart John Kerry met on the sidelines of this week's Asia-Pacific Economic Cooperation (APEC) summit in Lima, Peru. The situation in Syria was expected to top the diplomats' agenda.

The Russian foreign minister suggested that there may be some progress in US-Russia Syria discussions, but that the process of agreeing clearly on the differentiation between terrorists and the Syrian opposition remains impossible.

Moscow is dismayed that Washington appears to be keeping the al-Nusra Front active, despite the fact that the United Nations has declared that group to be terrorist, Lavrov added.

"The contacts are bringing some result, but everything depends on the same issue, which is why the Americans had failed to fulfill our agreements with them, that is the differentiation between the so-called moderate opposition and Jabhat al-Nusra," Lavrov said.

"But, nonetheless, we will try to find a way out of this situation. I think John Kerry is sincerely interested in that."

As Obama prepares to leave office, Lavrov hopes common sense will prevail in Washington, and said that, as for President-elect Donald Trump, relations between Russia and the US under its new leadership will depend on Trump.

On Thursday, US President Barack Obama expressed hope that Washington and Moscow would be able to cooperate in areas "where our values and interests align" once Trump becomes president. However, the US president said he hoped Trump would not simply agree to convenient deals with Russia that might violate international norms or create long-term problems.

"If you are ending your term as president, it is probably better to respond to some questions and give some advice in relation to positive matters, such as in what concerns the resolution of America’s internal problems, there are a lot of those, and in what concerns the development of external ties. But ensuring continuity on a negative basis will not work, in my opinion," Lavrov said in an interview with Russia’s Rossiya 24 TV channel.