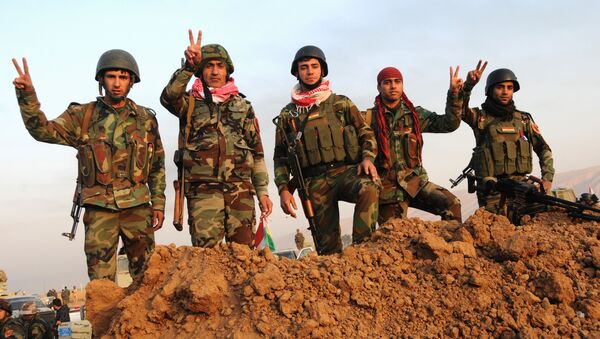 © Sputnik / Hikmet Durgun
Subscribe
Kurdistan Region President Masoud Barzani said that Kurdish forces will stay in the territories that were reclaimed from Daesh before the commencing of the battle of Mosul.

Iraqi Forces Move One-Third of Way Into Eastern Mosul - Pentagon
MOSCOW (Sputnik) — Kurdish forces will stay in the territories that were reclaimed from Daesh before the commencing of the battle of Mosul, under a deal with the United States and the Iraqi government, Kurdistan Region President Masoud Barzani said on Wednesday.

"We have a deal with America, between the Pentagon and the Peshmerga ministry — and with the Iraqi government — that the defense lines before the Mosul operation are non-negotiable… Our only goal is to protect the security of people in these areas and for the Peshmerga to back it. We will never ever again let you be displaced and you can count on us for that," Barzani said, as cited by the Rudaw media network.

Barzani, who was speaking from the town of Bashiqa, defended the participation of the Kurdish forces in the Mosul battle by saying that it was important for the security and stability of the Kurdistan Region and its people that the Peshmerga take part in the Mosul battle. He also noted that before Daesh entered Mosul there were 300,000 Kurds living in the city.

On October 17, Iraqi Prime Minister Haider Abadi launched the operation to retake the city. The operation began with 4,000 Kurdish Peshmerga fighters and 30,000 Iraqi soldiers backed by the US-led anti-terror coalition.