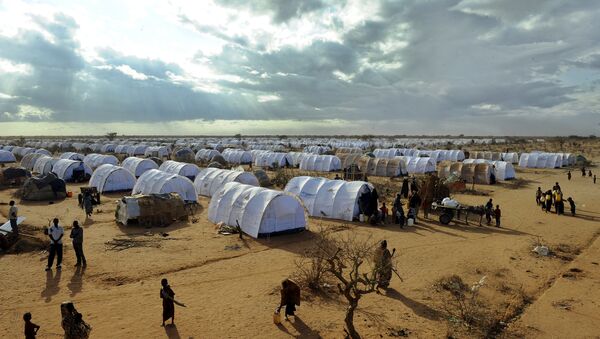 Interior Cabinet Secretary said that Kenya decided to delay the closure of the Dadaab refugee camp, the biggest refugee facility in the world, by six months.

"The government has accepted the request to extend the deadline for completion of repatriation of Somali refugees and eventual closure of Dadaab Refugee complex by six months," Nkaissery was quoted as saying by The Standard Digital media outlet.

The Kenyan official explained that the decision had been made following remarks of UN High Commissioner for Refugees’ (UNHCR) Commissioner Filipo Grandi, who asked Kenya to give more time for repatriation of refugees.

The repatriation program will be issued next month, Nkaissery added, pointing out that the refugees will not be sent to Somalia as the Amnesty International human rights group had earlier claimed.

"Kenya is committed to upholding international law in the repatriation process because we respect all international protocols that are signatory," Nkaissery stressed.

Kenya hosts more than 600,000 people at refugee camps in the northern part of the country, which were established in early 1990s. Most refugees come from war-torn Somalia and unstable South Sudan. The Dadaab complex that includes five camps hosted about 350,000 individuals with over 200,000 refugees still remaining there.

In 2015, Nkaissery said that refugee camps, particularly the Dadaab complex, were sources of terrorism. After Al-Shabaab terrorists’ attack on Garissa University College on April 2, 2015, Kenya repatriated more than 4,200 Somalian refugees under the UNHCR assisted program.