US Congress Passes Bill to Extend Iran Sanctions Over Next Decade 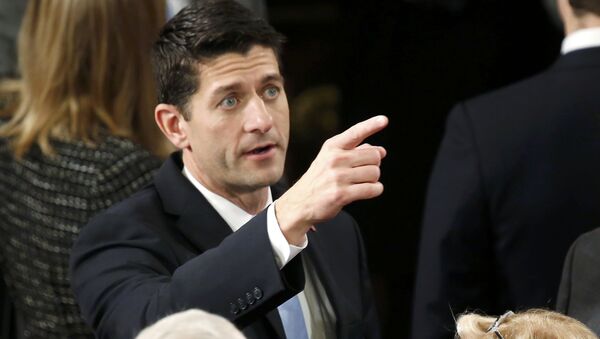 © REUTERS / Gary Cameron
Subscribe
House of Representatives speaker Paul Ryan said that the US Congress has passed a bill seeking to extend sanctions on Iran for another ten years.

WASHINGTON (Sputnik) — The US Congress has passed a bill seeking to extend sanctions on Iran for another ten years, House of Representatives speaker Paul Ryan said in a statement.

"Today’s bipartisan vote will help maintain our ability to immediately reinstate sanctions against Iran over the next decade," Ryan stated on Tuesday.

House Committee on Homeland Security Chairman Michael McCaul said in a statement the Iran Sanctions Act (ISA), which was enacted some 20 years ago, is a core element of the US effort to counter "Iranian aggression."

With Sanctions Gone Iran is Walking Tall Again
The congressman noted that the new bill "extends sanctions for ten years on Iran’s illicit weapons programs and ballistic missile development that were not suspended as part of the Obama administration’s flawed nuclear deal."

In July 2015, Iran signed a historic deal with the P5+1 group of countries, comprising the United States, Russia, China, France and the United Kingdom plus Germany, to maintain a peaceful nature of nuclear program in exchange for sanctions relief.

Under the agreement, some sanctions, including embargoes on gas and oil trade, were lifted off Iran in exchange for compliance with safety guidelines on Tehran's nuclear program.

The accord allowed Iran to resume its petroleum exports and implementation of a number of frozen projects in the sphere of energy.