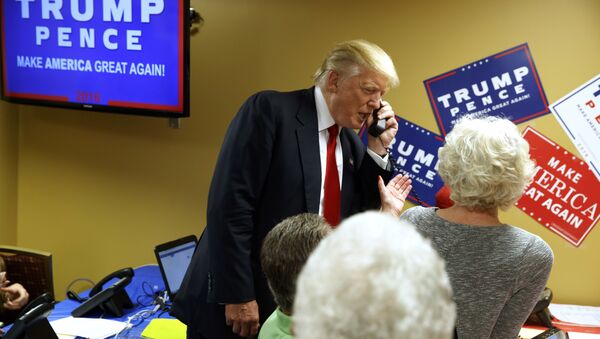 WASHINGTON (Sputnik), Michael Hughes — On Tuesday, in an op-ed published on the Rare news website, US Senator Rand Paul warned that Trump’s rumored pick for secretary of state, John Bolton, is a dangerous neoconservative who supported the invasion of Iraq and has called for all-out war in Syria, despite Russia’s presence in the country.

"Trump will face the same risk of treachery from his inner circle as [outgoing President Barack] Obama did," Todd, a former national security advisor for President Bill Clinton, said on Monday. "Trump does not know whom he can trust on foreign policy and who among his growing entourage is on the payroll of expansionist regional leaders like Turkish President [Recep Tayyip] Erdogan."

Neoconservative ideologues and well-paid Washington lobbyists are determined to follow through on destroying the Assad regime and the Iranian leadership, Todd suggested.

Trump must resist the ceaseless plotting of this neoconservative cabal, Todd maintained, and should work with Obama on a transition plan to combat terrorists in Syria.

Trump Must Avoid Picking Neocon John Bolton as US Secretary of State - Rand Paul
"Obama can do much over the next two months to prepare the path for a resolution of the Syria crisis by keeping Trump engaged as the United States pursues al-Nusra terrorists, hopefully in tandem with Russian and Syrian operations," Todd stated.

Obama has been forced to conceal the treachery he has dealt with from his own team of national security advisors because of the president’s political obligation to the Democratic Party, Todd claimed.

"Since 2012, when Obama discovered that his own intelligence chief was covering up evidence showing that chemical weapons used against civilians did not come from Assad's arsenal, Obama has had to operate knowing that he could not trust his inner circle," Todd said.

Now that the Democrats have lost the presidential and congressional elections, she explained, Obama is free to do openly what he had previously wanted to do in secret, including targeting Nusra Front instead of pushing for regime change in Syria.

Russian President Vladimir Putin, Todd continued, should advise Trump that Washington’s dealings with Erdogan could determine US policy towards Syria and the Middle East in general.

Last week, Obama ordered the US military to deploy more drones over Syria to take out Nusra Front leaders. Russian Deputy Foreign Minister Sergey Ryabkov said Moscow welcomed the decision, but has yet to receive official confirmation outside of media reports.

On Monday, Putin and Trump discussed in a phone call the need for US-Russian joint efforts against terrorism and a settlement to the conflict in Syria, the Kremlin’s press service said in a statement.

000000
Popular comments
Trump talks a good game when it comes to improving international policies in Middle East and Russia. This is certainly an improvement over his election opponents, but he is up against a lot of opposition from the establishment on many fronts. Now he will be dealing with our wonderful warmonger intelligence briefings. This is probably why Putin was quick to contact him, he needed to get to him before they did. Let's hope he stands strong against such intense pressure. Hope is still there. Trump can do the right thing. I pray he does.
Darrell R
16 November 2016, 03:10 GMT2
000000
...Yeah, Bolton is a very bad choice for SoS. I sure hope Trump doesn't pick him. Kinda had an "uh oh" moment yesterday when I first read about Bolton being a candidate.
Hussite
16 November 2016, 07:17 GMT1
000000
Newsfeed
0
New firstOld first
loader
LIVE
Заголовок открываемого материала
Access to the chat has been blocked for violating the rules . You will be able to participate again through:∞. If you do not agree with the blocking, please use the feedback form
The discussion is closed. You can participate in the discussion within 24 hours after the publication of the article.
To participate in the discussion
log in or register
loader
Chats
Заголовок открываемого материала
Worldwide
InternationalEnglishEnglishMundoEspañolSpanish
Europe
DeutschlandDeutschGermanFranceFrançaisFrenchΕλλάδαΕλληνικάGreekItaliaItalianoItalianČeská republikaČeštinaCzechPolskaPolskiPolishСрбиjаСрпскиSerbianLatvijaLatviešuLatvianLietuvaLietuviųLithuanianMoldovaMoldoveneascăMoldavianБеларусьБеларускiBelarusian
Transcaucasia
ԱրմենիաՀայերենArmenianАҧсныАҧсышәалаAbkhazХуссар ИрыстонИронауОssetianსაქართველოქართულიGeorgianAzərbaycanАzərbaycancaAzerbaijani
Middle East
Sputnik عربيArabicArabicTürkiyeTürkçeTurkishSputnik ایرانPersianPersianSputnik افغانستانDariDari
Central Asia
ҚазақстанҚазақ тіліKazakhКыргызстанКыргызчаKyrgyzOʻzbekistonЎзбекчаUzbekТоҷикистонТоҷикӣTajik
East & Southeast Asia
Việt NamTiếng ViệtVietnamese日本日本語Japanese俄罗斯卫星通讯社中文（简体）Chinese (simplified)俄罗斯卫星通讯社中文（繁体）Chinese (traditional)
South America
BrasilPortuguêsPortuguese
NewsfeedBreaking
19:20 GMTFlorida Governor Ron DeSantis Takes Aim at Biden Administration’s ‘Catch-and-Release' Policy
19:08 GMTElon Musk Ranked Number One as he Surpasses Jeff Bezos on Forbes’ Real Time Billionaires List
19:07 GMTUS Reportedly Didn’t Tell Afghan Army of Plans to Slink Out of Bagram Due to Fear of Taliban Attacks
18:56 GMTSeveral Fireballs Spotted in US Skies – Video
18:53 GMTFrance's Greens Pick EU Parliament Member Jadot as Presidential Candidate
18:51 GMTCould Report on 'CIA Plot' to Kill Assange Help WikiLeaks Founder Evade Extradition to US?
18:44 GMTYouTube Permanently Removes 2 German Accounts of Russia's RT
18:33 GMTNY Gov. Hochul Signs Executive Order to Alleviate Health Care Workforce
18:28 GMTBlah Blah Blah: Greta Thunberg Slams World Leaders at Youth Climate Summit
18:19 GMTAnnapolis Newspaper Shooter Ramos Sentenced to More Than 5 Life Sentences Without Parole
18:19 GMTPsaki: Generals' Advice to Keep 2,500 Troops in Afghanistan 'Not a Long-Standing Recommendation'
18:03 GMT'Not a Stable Man': Ousted Punjab State Chief Slams Congress Party Leader
17:58 GMTTaliban to Temporarily Adopt Constitution of Afghanistan’s Last Monarch
17:43 GMTOver 400,000 Americans Receive COVID-19 Booster Shot During Weekend
17:43 GMTWhat's Behind Erosion of Public Trust in Biden on COVID-19?
17:10 GMTBiden Administration Gives $1Bln Boost to 1,300 Health Clinics Across US
17:00 GMTThe Hague City Council Member Suspected of Plotting to Kill Acting Prime Minister, Report Says
16:53 GMTTrump Called Ex-Press Secretary Grisham to Insist His Penis Wasn't 'Toadstool-Shaped,' Book Claims
16:48 GMT'Sexualised Body': Woman's Statue in Italy Evokes Outrage Over 'Male Chauvinism'
16:28 GMTTaliban Warns of 'Consequences' if US Drones Continue to Violate Afghanistan's Airspace