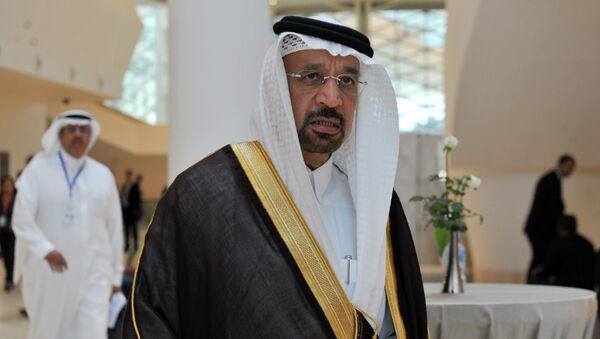 © AFP 2021 / Ryad Kramdi
Subscribe
The Minister of Energy, Industry and Mineral Resources of Saudi Arabia Khaled bin Abdulaziz Al-Faleh will meet his Russian and Qatari counterparts ahead of a crucial meeting of the Organization of the Petroleum Exporting Countries (OPEC) member states on oil output freeze, media reported.

In late September, the OPEC member states reached a preliminary deal to set the oil output ceiling at 32.5-33 million barrels a day for the whole cartel. The OPEC countries are set to finalize the agreement on oil output freeze at the OPEC summit in Vienna on November 30.

Some non-OPEC oil-producing countries, including Russia, have stated that they would consider joining the freeze deal.

The move has been driven by plunging oil prices and an oversupply in the global energy market.