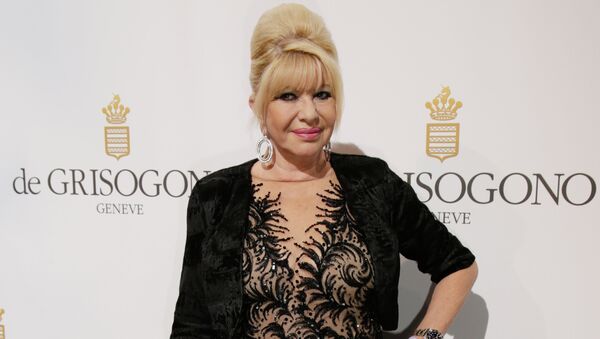 © AFP 2023 / JEAN CHRISTOPHE MAGNENET
Subscribe
International
India
Africa
Ivana Trump (nee Zelnichkova), President-Elect Donald Trump’s 67-year-old ex-wife told The New York Post in an interview that she would like to become the U.S. ambassador to Czech Republic, where “everybody knows her.”

“It would be a great choice!” Czech president Milos Zeman’s spokesman Jiri Ovcacek commented on Twitter.

​Czech Senator Jaroslav Doubrava told Sputnik Czech that many politicians and a part of the Czech public would welcome Ivana Trump’s appointment.

“An ambassador like she would become a guarantor of the improvement of American-Czech relations,” Doubrava expressed his hope.

The senator said the current U.S. Ambassador to the Czech Republic Andrew Schapiro has done his uttermost destabilize the country.

“I don’t think that constant interference in the internal affairs of the country where he works is the responsibility of an ambassador. And that’s exactly what Schapiro is doing,” Doubrava added.

He mentioned that Shapiro has taken the liberty of judging not only the state policy of the Czech president, but also his foreign visits, as it happened when Zeman attended the celebration of the 70th anniversary of the victory over Nazi Germany in World War II in Moscow.

“Shapiro should better discuss and declaim (if he’d like) the policy of his own president. Czechia is a sovereign state, not an American state,” Doubrava told Sputnik.

The senator assured he does not expect any difficulties emerge because of “pani Trumpova” not being a professional in politics. He said that the most important thing for a diplomat is his or her attitude towards the country in which this diplomat represents the interests of his state.

“I would not expect Ivana Trumpova’s appointment to cause any problems in Czech-American relations, I believe it would rather tackle the problems we have now,” Doubrava said.

The senator said that he could remember Ivana Trump as a model in her young years, when she made an absolutely charming impression with her outstanding beauty and notable personality.

“I think now she had gained lots of life experience and business skills. She won “the hotelier of the year” title in the USA,” the senator said.

Doubrava added that when speaking about the necessity to improve Czech-American relations he does not mean that the majority of common people in Czech have negative attitude towards the USA, however, state representatives are different.

“There is a generally negative perception of the U.S. political elite, and to a large extent it is the consequence of such, I would say, untypical for an ambassador behavior as Shapiro demonstrates,” Doubrava specified.