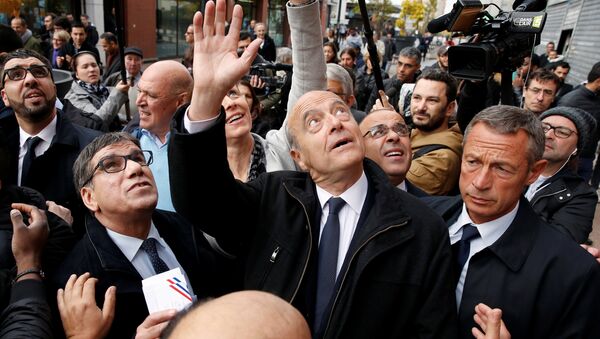 Ahead of the November 20 primaries of the French center-right The Republicans party that must define its sole candidate for the 2017 presidential elections, former Prime Minister Alain Juppe is gaining support among many centrist politicians.

Presidential Hopeful Juppe Warns France Against 'Extremism' as Trump Wins
MOSCOW (Sputnik) — On Monday evening, Juppe presided over a gathering of more than 6,000 supporters in the indoor arena Zenith de Paris, where he was joined not only by many party fellows, but also by a wide range of high-profile politicians from the French centrist parties Democratic Movement (MoDem) and Union of Democrats and Independents (UDI), that openly endorsed Juppe against his main internal competitor — ex-President Nicolas Sarkozy.

Additional blow to the former French leader, as French journalists put it, was a presence at the meeting of famous actor Alain Delon, who in the past was actively supporting Sarkozy.

"We don't want a president who flirts each morning with the extreme-right. France doesn't need mini-Trump at Elysee Palace," President of UDI Jean-Christophe Lagarde told a gathering of Juppe's supporters, comparing Sarkozy, well-known for his harsh stance on Muslims and migrants, both with newly elected president Donald Trump and the French right-wing National Front's leader Marine Le Pen.

In Trump's Footsteps? Marine Le Pen Chances to Become French President Rising
The latest Ifop-Fiducial poll predicts that in the first round of Sunday's primaries Alain Juppe may secure 33 percent while Sarkozy is due to get 30 percent of votes. Overall, there are seven contenders for the party ticket.

With both Juppe and Sarkozy campaigning on almost similar platforms of cutting taxes and generally easing labor laws, the campaign is focused more on the personalities and their credibility.

"Sarkozy is very Bonapartist and Juppe is more centrist," member of the French Senate from UDI Yves Pozzo di Borgo told Sputnik on Tuesday, adding that former president — once nicknamed the "hyper-president" for his kinetic style — antagonized many by his strong wording and the way of speaking, while Juppe doesn't scare even left-wing voters.

As Socialist voters doubt their party candidate (the exact name will be known upon Socialists' primaries in January next year) to make it to the second round of the presidential election next year, according to research by Sciences Po’s Center for Political Research (Cevipof), the winner of the Republican vote will face Marine Le Pen in the runoff, thus making the primary almost as important as the election itself.

Request to Impeach Hollande Can Help Sarkozy Boost Presidency Chances - Official
But even the wide support of centrists doesn't guarantee Juppe's victory on November 20 or one week later if the second round of the vote is held, Pozzo di Borgo warned.

He mentioned that during the last week former French Prime Minister Francois Fillon, the third man in the race for the Republican presidential nomination, has dramatically improved his rating by 7-10 percent, according to different polls, enjoying support of about 20 percent of the Republicans voters.

"It is possible," UDI senator told Sputnik asked about Fillon's chances to win primaries, adding that it was the first time in history that France organized party primaries, so that nothing is written in advance.

"We need to wait, polls can't be fully relied on  – nobody believed in Trump," Pozzo di Borgo stated, referring to the recent victory by Donald Trump in the United States contrary to all polls predictions.

Prior to the first round of the Republicans vote candidates will hold the third TV debates on November 17.