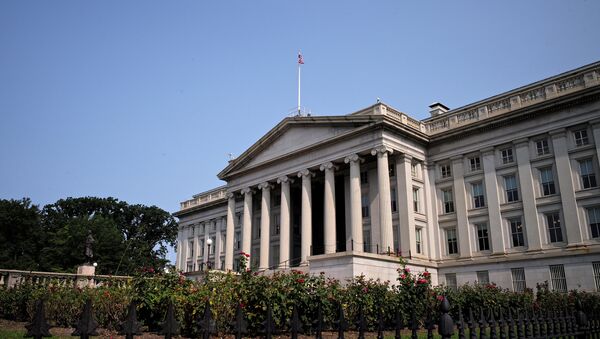 CC BY 2.0 / Roman Boed / The US Treasury Department
Subscribe
The US Department of the Treasury added six Russian lawmakers to the Ukraine-related sanctions list.

WASHINGTON (Sputnik) — The US Department of the Treasury added six Russian lawmakers to the Ukraine-related sanctions list, the Office of Foreign Assets Control (OFAC) said in a statement.

"Today’s action was closely coordinated with the EU, underscoring the strength of the US-EU partnership in maintaining pressure on Russia until it respects the security and sovereignty of Ukraine," OFAC Acting Director John Smith stated.

Last week, the European Union added the same six lawmakers to its Crimea-related sanctions list, which imposes an asset freeze and travel ban.

Additionally, Balbek and Shperov held local government positions in Crimea after 2014 and were later elected to the Duma.

Trump-Led Thaw Between Russia, US to Undermine EU Unanimity Over Sanctions
The sanctions block any of the individuals' property or interests that are subject to US jurisdiction and generally prohibit US persons from engaging in transactions with them.

In 2014, relations between the United States and Russia deteriorated significantly as the crisis in Ukraine escalated, with Crimea rejoining Russia and pro-independence eastern Ukrainian militias rising up against Kiev's rule.

The United States and its allies, accusing Moscow of fuelling tensions in eastern Ukraine, introduced a series of sanctions against Russia as a punitive measure.

Moscow refuted any involvement in the Ukrainian conflict and imposed a year-long food embargo on the countries that had sanctioned it, which was later prolonged as the sanctions were extended.