Despite Win, Trump Says He’s Still Opposed to the US Electoral College 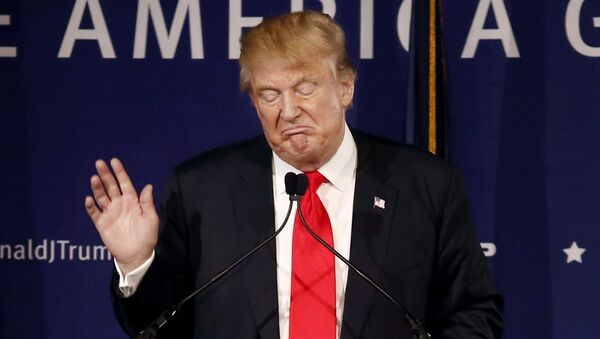 © AP Photo / Mic Smith, File
Subscribe
International
India
Africa
Even though Hillary Clinton is still holding a small lead against Donald Trump in the US election popular vote, and the latter’s win is clearly due to the country’s reliance on the controversial Electoral College system, the president-elect maintains that he disagrees with it.

On election night in 2012, Trump tweeted that “the electoral college is a disaster for democracy,” and many have been wondering whether he still feels the same way after his big win.

Does the US Electoral College Stand in the Way of American Democracy?
It turns out that he does.

During Trump’s first interview as president-elect on Sunday’s episode of 60 Minutes, Lesley Stahl asked him whether his stance on the Electoral College has changed since he won.

“There’s a reason for doing this because it brings all the states into play. Electoral College and there’s something very good about that. But this is a different system. But I respect it. I do respect the system.”

According to a poll conducted by Sputnik News, 60 percent of Americans agree with Trump’s sentiment, to varying degrees.

When asked whether they wanted to see a change in the existing electoral system, 45 percent of respondents said that they would like to move to a “one person-one vote” system, while 15 percent would opt for a hybrid somewhere between the two systems. Only 22 percent want to keep things the way they are, while 18 percent said that they did not know, or offered other suggestions.

Currently, the 538 electors in the Electoral College are responsible for electing the president. Each state has a number of electors, corresponding with their number of Senators and congressional representatives. To win, the president must obtain 270 of the electoral votes.

Many believe that the system is unfair, and that every vote should be considered equal, while those who support the use of the Electoral College argue that it supports lower-population states to have a voice in the vote.