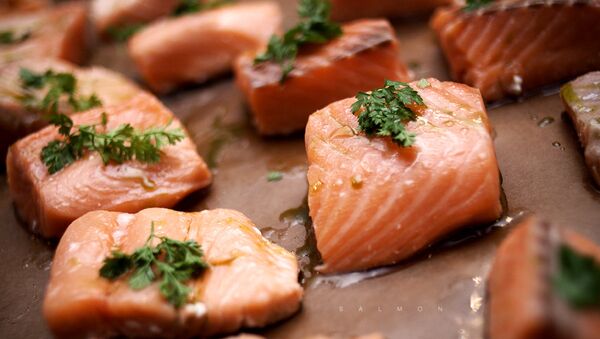 Norway's Second-Largest Export Threatened by Deadly Virus
When Norwegian scientists run tests to determine the health benefits of eating salmon, the do not use the farmed fish available in ordinary stores. Instead, they use specially designed "tailor-made" salmon, which contain significantly less pollutants and fats compared with your ordinary farmed salmon, Norwegian national broadcaster NRK reported.

The Norwegian Institute of Nutrition and Seafood Research (NIFES) is about to present a major study on the health benefits of fish consumption. The project was sponsored by Norway's powerful fish farming industry through the Fisheries and Aquaculture Industry Research Fund (FHF), which contributed 45 million NOK (roughly $5.5mln), the single largest investment in seafood and health.

The special feature of the project is that researchers according to their own announcement focused on the positive effect of fish consumption exclusively, which is expected to provide additional selling points for the Norwegian fish farming industry. The FHF made no secret of the fact that they expect the research to increase to consumption and the sale of seafood.

Other Fish to Fry: Finland to Farm Savory Russian Nelma
The final results, however, are expected to be somewhat one-sided, as one would expect. The "designer-made" salmon used in the experiment, which was condemned as "unethical" and "not trustworthy" by fellow Norwegian scientists, contains lower levels of marine omega-3, and pollutants such as dioxins and dioxin-like PCBs than salmon sold in stores.

"Currently, it appears that students [in Norway and Germany] who ate fish we had given them [for four months], scored better in concentration tests than those who did not," Ingvild Eide Graff, head of research at NIFES, told NRK.

A number of Norwegian doctors and scientists questioned the credibility of such a study.

"How can we rely on dietary advice based on research done on specifically designed salmon but not the one found in stores?" pediatrician Anne-Lise Bjørke Monsen at Haukeland University Hospital asked, expressing doubt that such practice is ethically defensible. "It can be compared with a pharmaceutical company doing studies on a pure version of its drug, but selling the dirty version of the drug on the market," Bjørke Monsen argued.

Question of Ethics? Norwegian Stake in Debated US Pipeline in the Spotlight
According to Eide Graff, the "tailor-made" salmon, cultivated in 2013, does not differ from the ordinary one. However, she admitted that "designer-made" salmon had 30 percent less dioxins. Dioxins and dioxin-like PCBs are fat-soluble and persistent, and accumulate therefore absorbed by humans, animals and fish alike.

This is not the first time the health benefits of Norwegian salmon are being questioned. In 2006, Russian scientists found too many dangerous heavy metals in Norwegian salmon, whereupon all salmon imports to Russia were stopped. Shortly afterwards, NIFES Director Øyvind Lie ensured that Norwegian salmon was perfectly safe and healthy and recommended his compatriots to have at least two meals of fatty fish a week.

​The same year, a NIFES-backed EU project recommended pregnant women to eat fatty fish. However, it later turned out that fish with reduced pollutant contents were used in the experiment, which undermined its credibility.

"Quite the contrary, this may indicate that salmon sold in stores should not be recommended for pregnant women in Norway," Bjørn Bolann told NRK.