Prevalence, Use of Illegal Drugs in US Rising at ‘Alarming Rate’ - Border Agency 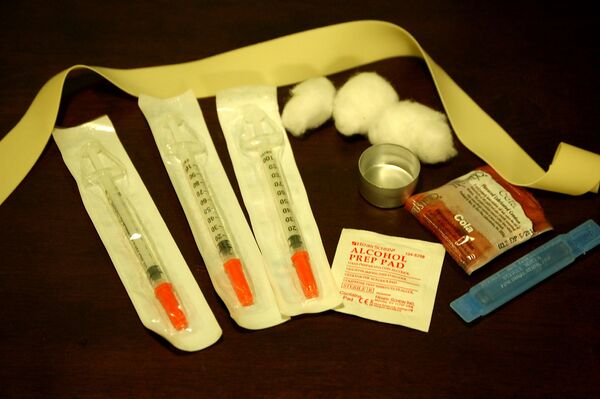 © Flickr / Todd Huffman
Subscribe
The availability of drugs in the United States has increased at a significant pace, compounding the challenge border agents face in tackling other crimes, an official with Customs and Border Protection (CBP) told Sputnik.

WASHINGTON (Sputnik) — “The use and availability of heroin, illegal opioids, other drugs, and the nonmedical use of prescription opioids in the United States, have increased at an alarming rate,” the official said.

CBP recently announced it was temporarily deploying an additional 150 agents to its Texas-based Rio Grande Valley sector in response to increased apprehensions of suspects along the US-Mexico border.

“Illicit networks facilitate the majority of cross-border activity, and smugglers prey on migrants by extorting money, confining them in deplorable conditions, and often physically and sexually assaulting them,” CBP stated in a release.

US Homeland Security Secretary Jeh Johnson, who oversees CBP, said that in October a total of 46,195 criminal suspects were apprehended between ports of entry on the southwestern border, compared with 39,501 in September and 37,048 in August.

Aside from apprehensions, smuggling is a major problem along the border. In fiscal year 2015, CBP agents seized 2.1 million pounds of drugs worth nearly $20 million in the area, the agency reported.

New Approach: Seattle Considers ‘Safe Places’ for Doctor-Supervised Heroin Use
The US-Mexico border crosses three states and stretches nearly 2,000 miles, from the Gulf of Mexico to the Pacific Ocean. CBP agents stationed in Texas seized 914,748 pounds of drugs worth about $9.2 million in the most recent reporting year, while California-based agents brought in drugs valued at $7.7 million and peers in Arizona seized $2.1 million in drugs.

“Combating transnational criminal organizations and drug trafficking organizations is a key component of our multilayered, risk-based approach to enhance the security of our borders,” the agency official told Sputnik. “CBP deploys multiple layers of security, including partnering with other investigative agencies, beyond just border screening to ensure our physical border is not the first or last line of defense, but one of many.”

The official added that, in the past decade, CBP has deployed more resources, technology and tactical infrastructure for securing the border than at any other time in the agency’s history.

While campaigning for president, Donald Trump said illegal immigrants from Mexico mostly bring drugs and crime to the United States, and he called them “rapists.” Trump has repeatedly vowed to build a wall on the border, saying the Mexican government would pay for the construction.

In his first television interview since winning the November 8 election, Trump said Sunday that he was committed to building a border wall or fence. He told CBS News’ “60 Minutes” that he would accept the construction of a fence, “but there are areas where the wall is more appropriate.”

000000
Popular comments
The fact that there is a continuous demand driving supply does not remove the need to gain some level of control over the issues relating to both drugs and illegal migrants.Each country has to decide where it stands and find a strategy to deal with it.It will be interesting to see Trump's approach.