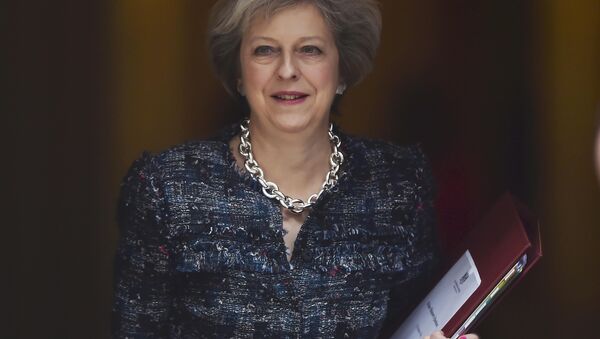 UK Prime Minister Theresa May is expected to deliver her first major speech on Monday, focusing on the issues of the country's foreign policy, since she has become the head of the government.

Brexit Process Pushes Scottish Unionists Toward Regional Independence From UK
MOSCOW (Sputnik) — Following the Brexit referendum, then-UK Prime Minister and Remain Campaign leader, David Cameron, resigned in July and was succeeded by May, who had been serving as the home secretary. Since her appointment, May has not said very much about her foreign policy strategy. The situation is expected to change on Monday, as the UK leader would give the speech during the Lord Mayor’s banquet at Guildhall in the City of London.

At the moment May, along with the UK Foreign Secretary Boris Johnson, are facing a number of complicated issues in the international relations, including the exit from the 28-nation bloc, ties with Russia and with the newly elected US administration, as well as tackling the ongoing Syrian conflict. All these issues are expected to be on agenda of her Monday speech.

The issue of leaving the European Union is crucial for the government that came to power, following the decision of the Britons to finish the country's membership in the bloc.

In the Run-Up to Election, America Failed to Heed 'Warning Sign' of Brexit Vote
Despite the importance of the issue, May's Brexit strategy is still unclear. The government officials, including the prime minister herself, respond to all the questions about the details of the Brexit process, saying only that they are guided by the principle "Brexit means Brexit." The opposition Labour Party has repeatedly criticized the Conservative government for the secrecy, while several opposition politicians have already accused May of having no blueprint for EU talks.

May has also pledged to trigger the Article 50 of the Lisbon treaty, which will kick-start the withdrawal process and begin negotiations over the post-Brexit relationship with Europe, by the end of March. At the same time, different experts suggest that she could do it even earlier.

May's promises about the launch of the Article 50 have been put into question after the High Court ruled that the UK parliament must vote on whether the government should start the formal process of leaving the European Union.

As the speech is expected to take place soon after May's recent trade mission to India, the prime minister is also expected to shape the country's strategy in trading relations with its neighboring states.

Trump's Win Shows 'Voters Are Willing to Teach Political Establisment a Lesson'
Soon after the victory of Donald Trump at the Tuesday US presidential election May congratulated him, adding she looked forward to building trade, security and defense ties.

"I would like to congratulate Donald Trump on being elected the next President of the United States following a hard-fought campaign … I look forward to working with President-elect Donald Trump, building on these ties to ensure security and prosperity of our nations in years ahead," May said.

On Thursday, the two politicians had their first conversation. According to a Downing Street spokesperson, they greed that the bilateral relations between London and Washington were very special, and building on it would be a priority for both of them. The spokesperson added that the president-elect had also invited the UK head of government to visit him "as soon as possible."

London and Moscow have a long history of relations, however they have deteriorated in recent years over the crises in Ukraine and Syria as well as over the death of former Russian agent Alexander Litvinenko and the downing of Malaysia Airlines flight MH17 in Ukraine.

UK Gov't Orchestrated Protest Outside Russia’s London Embassy – Moscow
May had already met with Russian President Vladimir Putin on September 4 on the sidelines of the G20 leaders' summit in China.

At the meeting the UK leader said that despite several differences, there was not obstacle for further dialogue.

Earlier in fall, media reported citing government sources that May was interested in ties with Russia, mostly on the security issues.

At the same time, the prime minister also said that Russia posed a "very real" threat to the UK interests, using it as a n argument to back her position in favor of renewing the aging Trident nuclear deterrent.

The ongoing conflict in Syria has lasted for about five years. Since its beginning it has claimed lives of thousands of people and displaced millions more. The international community has undertaken steps to end the Syrian conflict and to solve the humanitarian crisis in the Middle Eastern country.

UK Plans to Convince Trump of Pursuing Current US Administration Policy on Syria
London along with its allies has repeatedly called for resignation of Syria's President Bashar Assad have been supporting the so-called moderate opposition forces in Syria.

May's press office said that the United Kingdom had no plans to conduct military operations in Syria, adding that London was in talks with the international community to end violence in the country.

The minister also said that the conflict could only be settled by political means and Russia had to play its role in such a political solution.

When asked about possible introduction of the no-fly zone over Syria, May said that there were many problems and implementation of the zone would surely trigger a number of questions, including the issues of who would protect such zone.

Brexit, Trump, Request to Impeach Hollande: Part of New 'Shocking Global Trend'?
Ahead of the first May's speech on foreign policy, Johnson has visited a number of European countries, such as the Czech Republic, Serbia, Malta and Croatia, in order to show that London adhered to sustaining good relations with other European states, following the Brexit.

During his trip, the official met with the countries' leadership and discussed their ties with London, as well as migration crisis, the conflict-torn Libya, the Commonwealth of Nations, struggle against terrorism and of course the relations with the European nations after Brexit, ensuring that London would always protect the nationals of the EU member states in the United Kingdom and expressing hope that the EU countries would do the same for the Britons.