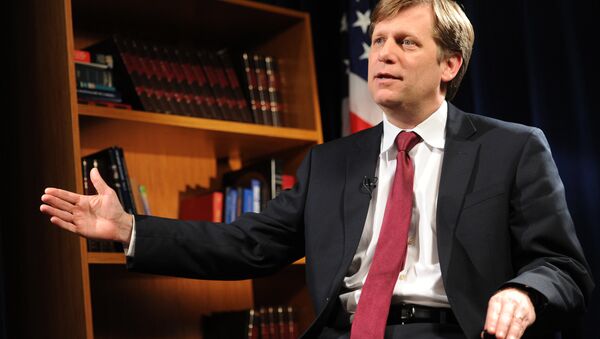 Earlier, McFaul wrote in his Facebook blog earlier on Friday that he had been put on Russia's "mirror sanctions list" sanctions list and could not travel to Russia.

McFaul Fail: Former US Ambassador to Russia Can’t Wrap Head Around Trump Victory
Later in the day, a source in the Russian Foreign Ministry told RIA Novosti that the former US ambassador had been included in the list for his active role in the destruction of Russia-US relations.

"The fact that he began to write that he was included [in the list] for being close to [US President Barack] Obama… We simply did not know about about the affiliation, but in general it is irrelevant. The point is the deliberate damage to bilateral relations [by McFaul]," Zakharova told Rossiya-1 TV channel.

According to her, McFaul is an official "who intentionally damaged bilateral relations." She also added that the inclusion of the former US envoy to Russia in the so-called mirror sanctions list is a "retaliatory measure."

Russian Foreign Ministry Spokeswoman Slams McFaul's Call to Curb Moscow
Russia already introduced entry restrictions for a number of nationals from the United States, the European Union and other countries in the spring of 2014. The move came in response to sanctions against Russian officials, introduced on the pretext of Crimea’s reunification with Russia and the crisis in eastern Ukraine.

Michael McFaul, 52, served as US ambassador to Russia in 2012-2014. Recently, McFaul made a controlversial remark via his Twitter account, claiming that the Kremlin had allegedly intervened in US presidential election and "succeeded." However, later he deleted his post and wrote that "Of course Putin is also big winner tonight" after Donald Trump secured a victory in the election with 290 electoral votes against his rival Hillary Clinton's 232.