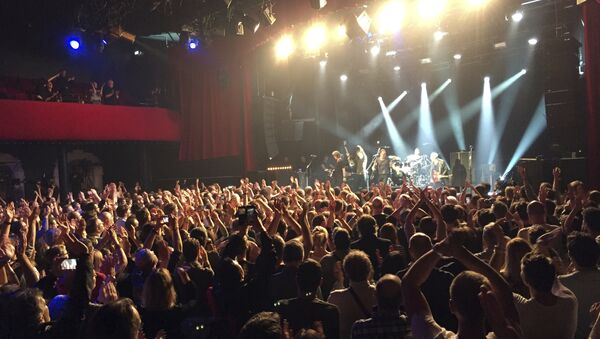 © AP Photo / Christophe Ena
Subscribe
The Bataclan theater in Paris reopened November 12 with a concert by Sting. The theater had been closed since the terrorist attacks last November that killed 130 people, 89 in the Bataclan.

Sting, who played the Bataclan in 1979 with The Police, opened his set by mentioning the victims.

'We Will Not Surrender': Paris' Bataclan to Reopen Despite Bloodbath Attack

"We've got two important things to do tonight," he said in French, Billboard magazine reports. "First, to remember and honor those who lost their lives in the attacks a year ago and to celebrate the life and the music of this historic venue."

He and the crowd then observed a moment of silence. Afterward, saying "We shall not forget them," Sting began "Fragile," which contains the lyrics "Tomorrow's rain will wash the stains away/But something in our minds will always stay" and "Nothing comes from violence and nothing ever could."

The rocker also played a song called "Inshallah," explaining the Arabic term as a "word of hope," according to Billboard.

His set list was clearly designed to be a crowd-pleaser, liberally sprinkled with hits from his days with The Police and his solo career.

Security was intense as the concert hall reopened, with armed police, extensive barricades and body searches. BBC reporter Nick Garnett said he was searched three times before being allowed to enter.

"It was difficult going through that door," said Elodie Suigo, who lost six friends in the attack. "I don't think I was the only one …. We cannot say it was a magical moment because of everything that changed in our lives. But [Sting] is a really great man," she said, according to the Associated Press.

Aurelien Perrin, 25, survived the Bataclan massacre but had friends who did not.

"I came alone tonight," he told the Associated Press. "It's very emotional, as I keep getting flashbacks of that night. I was standing just there, just the other side of the bar when it happened. Tonight is the first time I've been back here since," he said.

"I'm here because it's important to finally finish a concert that was never allowed to end. It's for the memory of my friend and for all the 90 people who died," he said.

Jules Frutos, who has been one of the managers of the venue for 12 years, said "We had to go on after such horror and not leave a mausoleum, a tomb," the AFP reported.

The concert hall had, of course, been cleaned and refurbished to its original state, and the smell of fresh paint lingered. It will be closed again November 13, the actual anniversary of the bloodbath in which terrorists associated with Daesh attacked cafes, a stadium and the Bataclan in the worst terrorist violence ever to hit France.

More than 1,700 people are official recognized as victims of the attacks. Nine remain hospitalized and others are paralyzed or otherwise permanently injured. More than 600 are still receiving psychological treatment related to the attacks, the French government says.

Proceeds from the show will go to two charities that help survivors, Sting said.

The Bataclan reported that all 1,000 tickets to the event sold out quickly and that they'd given other tickets to the families of those slain in the massacre last year. The hall has a capacity of 1,500.

Psychologists and counselors were on hand at the venue, the BBC reported.