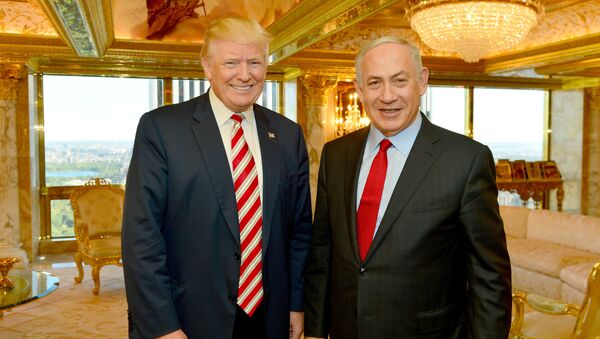 US President-elect Donald Trump said he wants to put an end to the Israel-Palestinian conflict.

"That's the ultimate deal," Trump said in an interview with the Wall Street Journal, referring to the complex conflict as the "war that never ends."

Just one day after winning the election, Trump invited Israeli Prime Minister Benjamin Netanyahu to meet with him in the US.

"As a deal maker, I'd like to do… the deal that can't be made. And do it for humanity's sake," the president-elect told the WSJ.

Trump noted that any deal should be directly negotiated between Israel and Palestine, but that his administration would play a "significant role in helping the parties to achieve a just, lasting peace," Israel's Hayom newspaper reported, according to the Times of Israel.

He also stated that Israel is a "beacon of hope to countless people," and that it shares the same values as the US, such as "freedom of speech, freedom of worship and the importance of creating opportunities for all citizens to pursue their dreams."

Russia to Continue Helping Settle Israel-Palestine Conflict, Counts on Trump
The Israeli right hopes Trump's election will end the animosity between Netanyahu's government and that of US President Barack Obama's administration, according to the Jerusalem Post.

However, two months are left before Obama leaves office. As US State Department Spokesman Mark Toner told reporters in Washington, "I can't rule out that there may be a new initiative before the end of this administration."

Meanwhile, Russian President Vladimir Putin has offered Moscow as a venue for Israeli-Palestinian talks. Russian Prime Minister Dmitry Medvedev stated, "Our country is ready to act as a mediator."