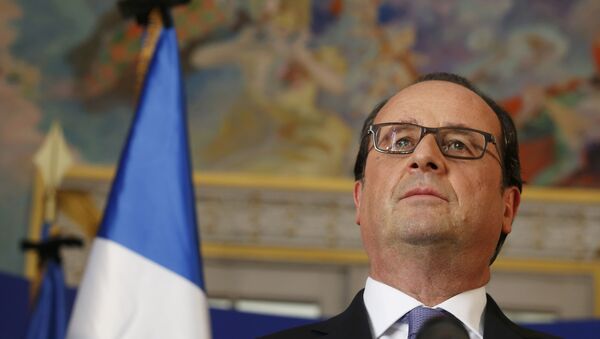 The motion for the impeachment of French President Francois Hollande can be used by supporters of his predecessor Nicolas Sarkozy, who announced a bid for the 2017 presidential elections, Rene Danesi, a member of the French Senate, told Sputnik.

"I am not convinced that Hollande's private talks with journalists on the duties of the President of the Republic are a matter for the High Court of Justice. However, the parliamentarians who support Sarkozy, like myself, see it as an opportunity to highlight Hollande’s incompetence and be more active than supporters of [presidential hopeful Alain] Juppe," Danesi said.

France’s former Prime Minister Alain Juppe is Sarkozy's main opponent in the contest for the presidential nomination from the Republican Party.

Danesi said that the motion to impeach Hollande was likely to be blocked by the ruling Socialist Party before the parliamentary vote.

"The government and the Socialist deputies will not allow the indictment to be placed on the agenda of the National Assembly," he said.

Under the existing rules, a French president can be removed from office only by a two-thirds majority of both chambers of the parliament.

The resolution was provoked by the release in October of a controversial book written by two investigative reporters, "A President Should Not Say That: Secrets of Five Years in Office," which records dozens of Hollande's private conversations with journalists including the president's comments on the French airstrikes in Syria and his admission that he personally ordered the assassination of enemies of the state.