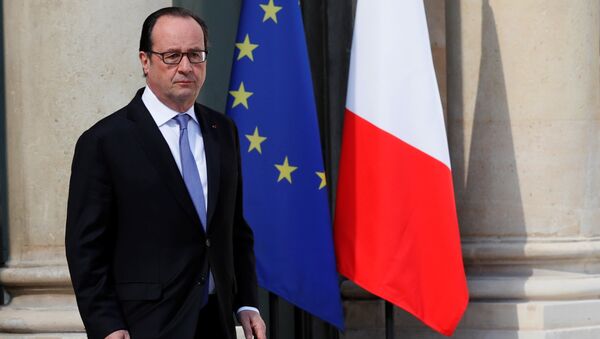 © REUTERS / Philippe Wojazer
Subscribe
Recently initiated draft resolution for the Francois Hollande impeachment may be blocked by the Socialist Party lawmakers even before it reaches the parliament.

French MPs Call on 'Bad President' Hollande to Answer for His 'Disgraceful' Acts
MOSCOW (Sputnik) — A draft resolution to the High Court, calling for the impeachment of French President Francois Hollande over accusations that he breached security in disclosing classified information to journalists, may be blocked by the Socialist Party lawmakers before it reaches the parliament, member of the French National Assembly Nicolas Dhuicq told Sputnik.

"Socialists are going to find a way to block this draft resolution before it reaches the parliament’s voting," Dhuicq said.

According to the National Assembly member, who signed the motion, the draft resolution, initiated by French Republican parliamentarian Pierre Lellouche, included over 70 signatories from The Republicans' party members, with at least 150 Republicans supporting this step against the Socialist Party president.

​Under the existing rules, a president can be removed from office only by a two-thirds majority of both chambers of the parliament.

Hollande Preparing Congratulation Letter Only for Clinton 'Thoughtless'
The lawmaker believes that Hollande had "seriously violated defense secrecy being the commander-in-chief of the French Armed Forces, when [he] talked to press."

The resolution was provoked by the release in October of a controversial book "A President Should Not Say That: Secrets of Five Years in Office," which records dozens of Hollande's private conversations with journalists including the president's comments on the French airstrikes in Syria and his admission that he personally ordered the assassination of enemies of the state.