Some 25,000 Rally in Germany's Cologne Against Erdogan (VIDEO) 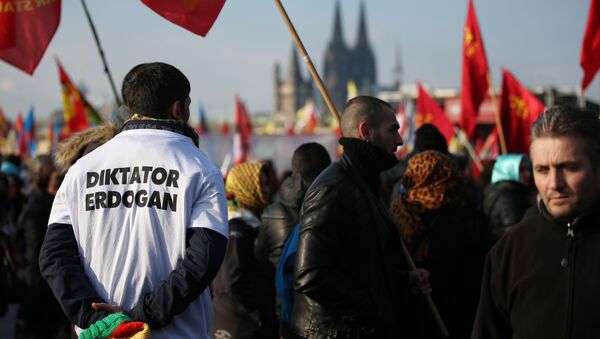 Some 25,000 people on Saturday participated in a rally in the western German city of Cologne protesting against Turkish President Recep Tayyip Erdogan.

MOSCOW (Sputnik) — According to the Stuttgarter Nachrichten newspaper, thousands of people, mostly from the Alevi and the Kurdish communities marched through Cologne protesting against Erdogan's policy and several of them had insignia of the Kurdistan Workers' Party (PKK), which is banned in both Turkey and Germany.

Around 6000 Kurds demonstrated against Erdogan in Cologne today, demanding an end of the German-Turkish cooperation. via @ksta_news pic.twitter.com/NwPZqxwnfh

Erdogan Slams Germany for Granting Asylum to Gulen's Followers
The newspaper added that during the rally, a man from one of the groups of Kurdish activists fired a firework, and later the group scuffled with police officers, who had detained several protesters in an attempt to restore order, after using pepper spray to disperse the group.

This is not the first anti-Erdogan rally in Cologne held this fall. On September 3, some 30,000 people took to the streets of the city, demanding freedom for Abdullah Ocalan, a founding member of the PKK and protesting against the "dictatorship" of the Turkish leader.