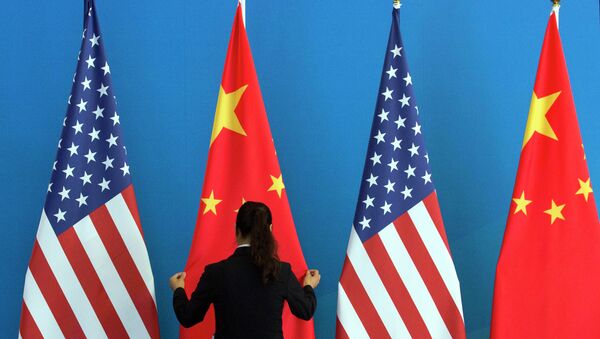 World
China Hopes for New US Administration’s Support in Creating FTAAP - Vice FM
Two days after Donald Trump has secured his victory in the US presidential elections, China urged the new US administration to support establishing the China-promoted Free Trade Area of the Asia-Pacific (FTAAP).

"We hope that promotion of the FTAAP serves not only Chinese interests, but also the interests of the other regional economies, including the United States. We hope that the new US government and president will continue supporting the creation of the FTAAP," Chinese Vice Foreign Minister Li Baodong said at a special briefing on Thursday.

This is the first diplomatic gesture of Beijing towards the new US administration after the congratulations call of President Xi Jinping on Wednesday.

China has proposed the Free Trade Area of the Asia Pacific (FTAAP) and the Regional Comprehensive Economic Partnership (RCEP), which some observers see as competitors to the Trans-Pacific Partnership (TPP) championed by President Barack Obama.

Obama had framed TPP, which excluded China, as an effort to write Asia’s trade rules before Beijing could, establishing US economic leadership in the region as part of his “pivot to Asia”.

Trump to Take 'Tough Line' on US-China Trade Relations, Likely to Kill TPP
Meanwhile FTAAP is expected to top the agenda of the upcoming Asia-Pacific Economic Cooperation (APEC) Summit, which is set to take place on November 19-20 in Lima, the capital of Peru.

Commenting on China's urge on the US which comes ten days before the Summit, Andrei Volodin told Sputnik that the move wasn't made in haste but called it part of Beijing's "delicate game of outstripping the US" in Asia-Pacific.

"By announcing such economic initiative, China is pursuing a long-term purpose: to reveal the US plans for the Asia-Pacific, and not only in terms of its foreign economic ties," he told Sputnik.

"I think Beijing will now start step-by-step probing of Donald Trump's new administration regarding its plans for the Asia-Pacific, power dynamics in the US-China-Russia triangle and the US-China relationship," he added.

This initiative fully fits into the geopolitical conception of China and should not be regarded only in terms of economics, Volodin said.

During his election campaign Trump took a protectionist stance on trade issues and labeled the TPP championed by President Barack Obama a "disaster". There is now little chance of it coming up for vote in Washington before his inauguration in January.

However Beijing understands that the supporters of the proposed agreement won't give it up without battle and it will be a longtime tug of war.

This is Why US Not in Position to Compete With China After 25 Years of Hegemony
Hence China's proposal might only seem neutral, but in fact it is an attempt to seize the initiative, the expert says. And it is quite clear that it will be China and not the US who will play the leading role in the project.

While commenting on the potential reaction of the new US administration and the President Elect in particular to FTAAP, Andrei Volodin suggested that Trump might react positively.

"Trump is quite a pragmatic man and his actions in the position of the 45th US President might differ greatly from the anti-China election pledges of Trump the candidate," he said.

"Trump will most certainly consider the Chinese suggestion from the pragmatic point of view, given that there are three clear key players on the global arena – US, Russia and China. And the US will match its policies with this factor as well as China will shape its policies from the perspective of the relationship within Washington-Moscow-Beijing triangle," Volodin said.

China will certainly try to find common grounds with the US, including the free trade zone, as it is only too clear that the economies of the two countries are intertwined to the highest degree possible, the expert finally said.