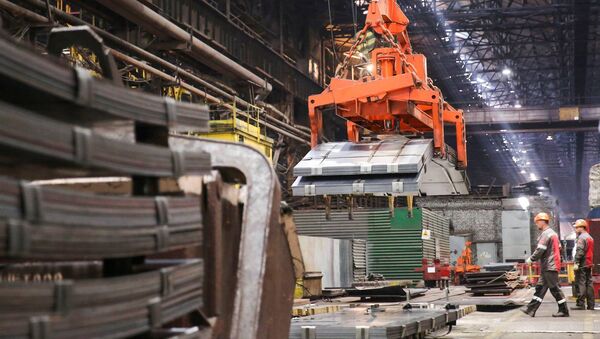 © Photo : Facebook/Zaporizhstal
Subscribe
IMF-mandated hikes in electricity prices for businesses have made whole sectors of the Ukrainian economy uncompetitive, making it more profitable to shut factories down than to keep them operating, says Ukraine's oldest and largest business association.

Ukrainians in Shock as 'Revolutionary' Political Elite’s Riches Revealed
Speaking in Kiev on Thursday at the Ukrainian League of Industrialists and Entrepreneurs' annual conference, president Anatoly Kinakh pointed out with dismay that authorities in Kiev did not bother to carry out the necessary economic calculations when they decided to raise tariffs.

"Where are the necessary technical and economic calculations?" the official asked. "Where were the forecasts about how this will affect the competitiveness of our economy? How does the tariff increase correlate to consumers' ability to pay? There are no answers to these questions. And this is very serious, because all we are doing is seeing the decline of citizens' standard of living."

For example, Kinakh noted, the massive Zaporozhye aluminum plant has recently been forced to stop operations completely due to the high cost of electricity; its energy-intensive production has been made uncompetitive thanks to whopping 40% electricity price hikes and the end of subsidies.

"If before, the plant was able to purchase electricity at a special rate, now this is impossible; the plant is being offered electricity at the same price as other companies, making it uncompetitive," the official lamented.

Denial, Frustration, Outrage: Kiev Having Trouble Dealing with Trump Victory
The legendary Zaporozhye aluminum plant, established in 1930, was once one of the largest aluminum smelters in the world, and famous for its unique production methods. Producing over 100,000 metric tons of aluminum a year in its heyday, the plant played a crucial role in contributing to many key industries, including the Soviet and post-independence Ukrainian aerospace industry, which has suffered its own tragic decline in recent years. Antonov, once a legend of global civilian and military aircraft production, isn't expected to produce even one plane this year.

Ukraine's International Monetary Fund-mandated austerity measures, combined with the loss of Russian markets for Ukrainian goods, have also hit ordinary Ukrainians hard. The IMF has insisted on further cuts to subsidies on utilities for low-income citizens, leaving millions uncertain where they will get the money to heat their homes this winter.

000000
Popular comments
That's exactly why for instance Singapore and Iceland refused 'assistance' from the IMF. The IMF 'Washington Concensus" Recipe imposes an extremist view of liberalization on the the client often inducing a kind of death spiral on the economy so that outside investors can buy assets at rock bottom prices. Only when there is nothing left to sell economy and prices are allowed to recover. The IMF facilitates such asset stripping resulting in a massive transfer of wealth from society to the local and foreign elite each time again.
JPH
11 November 2016, 15:37 GMT2
000000
The IMF is more likely to liquidate Ukraine in a mass bankruptcy, than create any increased standard of living, among its people. Sorry, you didn't figure that out, until now? Make the calculations, yourselves, if you can. Please don't rely on the IMF for anything, except to exploit them for your own benefit; if you can figure out how that can be done, somehow?
double bonus
11 November 2016, 15:24 GMT1
000000
Newsfeed
0
New firstOld first
loader
LIVE
Заголовок открываемого материала
Access to the chat has been blocked for violating the rules . You will be able to participate again through:∞. If you do not agree with the blocking, please use the feedback form
The discussion is closed. You can participate in the discussion within 24 hours after the publication of the article.
To participate in the discussion
log in or register
loader
Chats
Заголовок открываемого материала
Worldwide
InternationalEnglishEnglishMundoEspañolSpanish
Europe
DeutschlandDeutschGermanFranceFrançaisFrenchΕλλάδαΕλληνικάGreekItaliaItalianoItalianČeská republikaČeštinaCzechPolskaPolskiPolishСрбиjаСрпскиSerbianLatvijaLatviešuLatvianLietuvaLietuviųLithuanianMoldovaMoldoveneascăMoldavianБеларусьБеларускiBelarusian
Transcaucasia
ԱրմենիաՀայերենArmenianАҧсныАҧсышәалаAbkhazХуссар ИрыстонИронауОssetianსაქართველოქართულიGeorgianAzərbaycanАzərbaycancaAzerbaijani
Middle East
Sputnik عربيArabicArabicTürkiyeTürkçeTurkishSputnik ایرانPersianPersianSputnik افغانستانDariDari
Central Asia
ҚазақстанҚазақ тіліKazakhКыргызстанКыргызчаKyrgyzOʻzbekistonЎзбекчаUzbekТоҷикистонТоҷикӣTajik
East & Southeast Asia
Việt NamTiếng ViệtVietnamese日本日本語Japanese俄罗斯卫星通讯社中文（简体）Chinese (simplified)俄罗斯卫星通讯社中文（繁体）Chinese (traditional)
South America
BrasilPortuguêsPortuguese
NewsfeedBreaking
08:55 GMTPutin Offers Deep Condolences to Relatives of Perm University Shooting Victims, Kremlin Says
08:39 GMTAustralia Trade Minister Looks Forward to Meeting With French Colleagues Amid Sub Deal Row
08:38 GMTVolcano Eruption on Spanish Island of La Palma Forcing Evacuations
08:06 GMTMen Sleep Worse During Waxing Moon, Women Unaffected – Study
07:58 GMTEmmy Awards 2021: Big Winners, 'Hollywood's Most Hated Man' and #SoWhite Controversy
07:30 GMTIndia: Uproar Over Arrest of BJP's Kirit Somaiya in Maharashtra For Accusing Minister of Corruption
07:10 GMTFinnish PM Embroiled in Product Placement Controversy Over Instagram Story
07:05 GMTEight Killed as Gunman Goes on a Shooting Spree at Russia's Perm University
06:27 GMTCanada Set to Deliver Verdict in Testy Vote as PM’s Cakewalk Becomes Nail-Biter
06:17 GMTTaliban Order Women Working in Kabul to Stay at Home, Interim Mayor Says
06:12 GMTSweden Raises Taxes to Finance Largest Military Investment in Modern Times
06:01 GMTBoJo Vows UK’s ‘Ineradicable’ Love of France in Bid to Mend Fences Amid Diplomatic Row Over AUKUS
06:00 GMTBritain Considers Offering Loans to Energy Firms Amid Dramatic Hike in Gas Prices - Report
05:29 GMTRussia’s Ruling Party Ahead in Parliamentary Vote With Over 48%, Election Commission Says
04:34 GMTLive Updates: UK PM Johnson to Push Joe Biden to Lift COVID-19 Travel Ban With US
04:30 GMTNot in the Mood: Golden Retriever Does Not Want to Cuddle
04:28 GMTChinese Observers Give Positive Assessment of Russian State Duma Election
03:45 GMTMusk Adds Another Joke to Joe Biden’s ‘Sleepy’ Issue, When Asked About ‘Inspiration4’ Flight
03:16 GMTKhamenei Appoints New Head of Iranian Air Force
03:16 GMTWait, Again? New Photo of Trudeau Wearing Blackface Emerges on Social Media