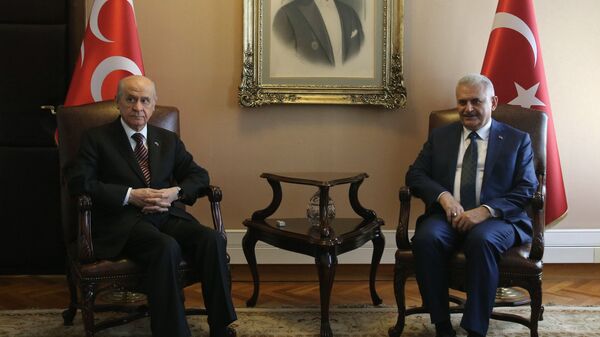 "Together with the MHP, we will make the changes in the constitution, and bring the presidential system," Yildirim said, as quoted by the Daily Sabah newspaper.

The Turkish parliament will be able to pass the bill by the majority of 367 or transfer it into a public referendum if more than 330 members of the parliament support the move. The AKP has 316 seats in the 550-seat parliament and MHP has 40 seats.

New Turkish Constitution Draft Ready for Parliament Submission - Prime Minister
The other two parties, the Republican People's Party (CHP) and The Peoples' Democratic Party (HDP), oppose the reform, including the replacement of the parliamentary republic by the presidential system.

A proposal to replace Turkey's parliamentary democracy with a presidential system is expected among a set of constitutional reforms planned by the ruling party.