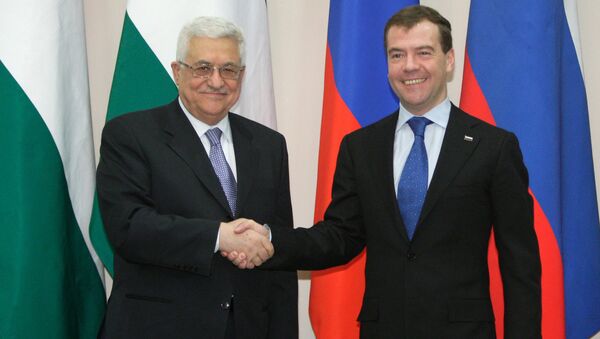 Medvedev and Abbas are set to discuss bilateral issues and Middle East situation.

The Soviet Union and Palestine established official relations in 1974, when the Palestine Liberation Organization opened its mission in Moscow.

On November 18, 1988, the Soviet Union officially recognized the State of Palestine that was proclaimed three days earlier in Algeria at a session of the Palestinian National Council.

In January 1990, the Palestinian mission in Moscow was transformed into the Embassy of the State of Palestine, headed by an ambassador.

The Palestinian National Authority was established in May 1994, bringing Russian-Palestinian relations to an inter-state level.

In August 1995, Russia opened its mission at the Palestinian National Authority in Gaza. In March 2004, the mission relocated to Ramallah.

In 2005-2013, he visited Russia ten times, including regions of Chechnya, Dagestan, Tatarstan, Bashkortostan, Chuvashia and Karachayevo-Circassia.

On April 29, 2005, Russian President Vladimir Putin became the first acting national leader to visit the Palestine. During talks with President Abbas, the Russian side reaffirmed its intention to "continue assisting Palestine in its efforts to assert statehood," as well as in developing economic projects, including those in the Gaza Strip.

On June 26, 2012, Russian reelected President Vladimir Putin visited Palestine for the second time. Putin and Abbas held talks at Abbas’ Bethlehem residence and discussed the Palestinian-Israeli peace process, the restoration of intra-Palestinian accord, as well as bilateral cooperation.

The Russian and Palestinian leaders have been maintaining regular contacts over the past few years.

In particular, they held bilateral meetings twice in 2014 (in January and June), and twice in 2015 (in April and September).

On April 18, 2016, Abbas paid a working visit to Russia. Putin and Abbas met in the Kremlin and discussed topical issues of the Russian-Palestinian agenda. As usual, they focused on prospects for the Palestinian-Israeli negotiating process.

Besides, Lavrov meets with Abbas each September during the UN General Assembly sessions in New York.

On April 13, 2015, during Abbas visit to Russia, the parties established an inter-governmental Russian-Palestinian commission for trade and economic cooperation. This cooperation format replaced the high-level working group for holding consultations on economic and investment issues. The commission is co-chaired by Russian Minister of Labor and Social Protection Maxim Topilin and Palestinian National Economy Minister Abeer Odeh.

According to the Russian Ministry of Economic Development, there is almost no investment cooperation, trade and economic ties between Russia and Palestine. Abbas explains the low bilateral trade turnover, estimated at about $1 million annually, by restrictions stipulated by 1994 Paris Agreement, envisaging an agreed-upon framework of Palestine’s economic and foreign trade operations by Israel.

Nevertheless, bilateral trade has been steadily expanding in the past few years. It has increased almost six-fold over the last five years, and reached $3.4 million in 2015.

COOPERATION IN OTHER SPHERES

Russia and Palestine actively cooperate in such spheres as education, culture and tourism.

Since the 1970s, Russia has been allocating federal-funded state stipends to Palestinian students at Russian universities.

In October 2010, the Administrative Directorate of the Russian President helped to finish construction of the museum and park complex in Jericho.

In June 2012, Putin and Abbas officially opened the Russian Center of Science and Culture, as well as a guest house for Orthodox Christian pilgrims in Bethlehem.

Russia also financed the renovation of the Church of the Nativity in Bethlehem. The Imperial Orthodox Palestine Society headed by Sergey Stepashin has become quite active nowadays, implementing educational, cultural and research projects. The Society is trying to promote tourism in Palestinian territories, mostly in Jericho, Bethlehem, Hebron and East Jerusalem.