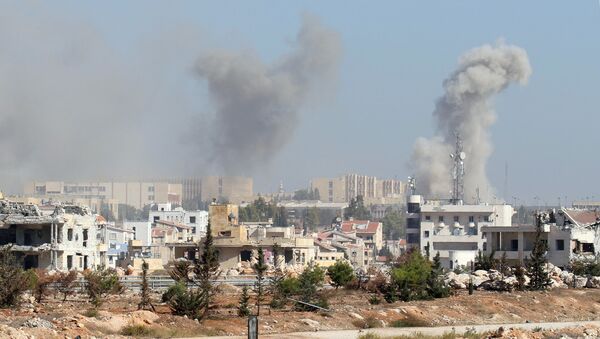 Moscow hopes the international community will react to information by Russian military confirming that militants use chemical weapons in Syria's Aleppo, the chair of the Foreign Affairs Committee of the Russian upper house of parliament said Friday.

MOSCOW (Sputnik) — Earlier in the day, it was reported that Russian military experts had found evidence of use by militants of chemical weapons, likely chlorine and white phosphorus, in Aleppo.

"This is not a sensation, as we have repeatedly presented such facts to the Organization for the Prohibition of Chemical Weapons (OPCW) and to the international community in general. The problem is that international media pay attention to such facts only if it is possible to find links to authorities in Damascus… The question is whether a wave of indignation in foreign media and angry condemnations from Western politicians will follow now," Konstantin Kosachev told RIA Novosti.

Russia's Defense Ministry said Friday that it would pass to the OPCW samples of soil and shell fragments found in Aleppo.

According to Kosachev, Moscow seeks to understand what is important for the international community — the fact of use of chemical weapons itself, or the possibility to accuse Syrian President Bashar Assad.