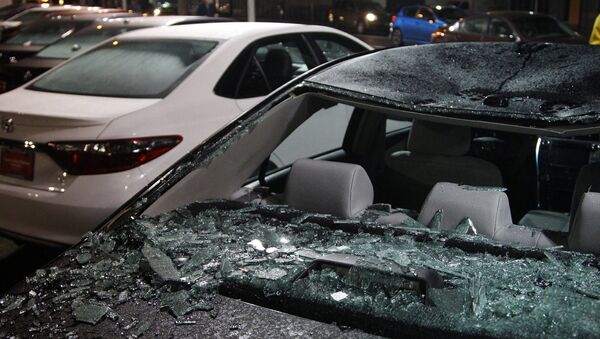 © REUTERS / Steve Dipaola
Subscribe
In the wake of anti-Trump protests that swept across the United States, the leader of the demonstration in Portland, Oregon established a public fundraiser to repair damage done to the city during Thursday night’s unrest.

Portland Police in Riot Gear Intervening in Anti-Trump Riots
PORTLAND (Sputnik), David Burghardt — The leader of the anti-Trump demonstration that was later defined as a riot by police in the state of Oregon’s most populous city of Portland has established a public fundraiser to repair damage done to the city during Thursday night’s altercations.

"In support of our goal to have a safe Portland for everyone, we are partnering with organizations such as Milenio (milenio-2016.org) to raise money to repair the damages done to small and local businesses last night," Gregory McKelvey, the leader of the Portland’s Resistance movement, said in a statement on Friday morning.

Protests in Portland have been going on since Wednesday when Republican Party nominee Donald Trump emerged as the winner in the US election, triumphing over the Democratic Party candidate Hillary Candidate who was considered a favorite by many pollsters and analysts.

McKelvey condemned the acts of some of the 4,000 participants and said those destroying property had nothing to do with the Portland’s Resistance movement.

"The violent actions that occurred last night had absolutely nothing to do with our group. We would like to take a few moments to disavow the actions taken to destroy property, to clarify the intentions and goals of our new efforts and to offer empathy to all the stakeholders in last night’s protests and those to come," McKelvey’s statement reads.

US Police Use Pepper Gas, Detain Protesters to Disperse Rally in Portland
The Portland Police Department later classified the protests as a riot and an unlawful assembly after vandalism and extensive damage to property occurred.

Some protesters armed themselves with rocks from construction sites, prepared gas flares, and threw objects at police, the department said earlier. It distinguished between "anarchists" and the rest of the demonstrators, calling on those "not wanting to be associated" with the rioters to assemble elsewhere.

Portland police detained at least 29 individuals in the early hours of Friday.

Portland’s Resistance leader McKelvey said another rally and "heal-in" would be held at Portland City Hall on Friday evening at 5:00 p.m. local time "to talk about our demands" and to discuss the movement’s campaign to repair the damage done in the city the night before.

"We sincerely apologize to anyone who[se] property was damaged, even though it was not done by our group, and we invite you to join us, to heal, and to consider the conditions that enrage, enflame and divide us all. Together we can heal this divide," McKelvey said in the statement.

Portland authorities have estimated damage at more than $1 million.

On Tuesday, Trump secured 290 Electoral College votes, which is 20 more than 270 votes required to win the presidency.

000000
Popular comments
why get the public to pay up? His responsibility (amongst others)
michael
12 November 2016, 00:01 GMT2
000000
Wow, what a wanker!!! Organizes a protest, insights hate and divide, then when things get out of hand he washes his hands of it all and blames the other group of guys down the road. But as a gesture of good faith he will take do nations from the nation to pay for the damage that those other guys did. Lets hope his administration fees are reasonable as we all know certain charities are anything but.
SPF
12 November 2016, 16:00 GMT1
000000
Newsfeed
0
New firstOld first
loader
LIVE
Заголовок открываемого материала
Access to the chat has been blocked for violating the rules . You will be able to participate again through:∞. If you do not agree with the blocking, please use the feedback form
The discussion is closed. You can participate in the discussion within 24 hours after the publication of the article.
To participate in the discussion
log in or register
loader
Chats
Заголовок открываемого материала
Worldwide
InternationalEnglishEnglishMundoEspañolSpanish
Europe
DeutschlandDeutschGermanFranceFrançaisFrenchΕλλάδαΕλληνικάGreekItaliaItalianoItalianČeská republikaČeštinaCzechPolskaPolskiPolishСрбиjаСрпскиSerbianLatvijaLatviešuLatvianLietuvaLietuviųLithuanianMoldovaMoldoveneascăMoldavianБеларусьБеларускiBelarusian
Transcaucasia
ԱրմենիաՀայերենArmenianАҧсныАҧсышәалаAbkhazХуссар ИрыстонИронауОssetianსაქართველოქართულიGeorgianAzərbaycanАzərbaycancaAzerbaijani
Middle East
Sputnik عربيArabicArabicTürkiyeTürkçeTurkishSputnik ایرانPersianPersianSputnik افغانستانDariDari
Central Asia
ҚазақстанҚазақ тіліKazakhКыргызстанКыргызчаKyrgyzOʻzbekistonЎзбекчаUzbekТоҷикистонТоҷикӣTajik
East & Southeast Asia
Việt NamTiếng ViệtVietnamese日本日本語Japanese中国中文Chinese
South America
BrasilPortuguêsPortuguese
NewsfeedBreaking
13:00 GMTPutin Undecided if He Will Run for President Again
12:49 GMTSudanese Police Use Tear Gas Against Demonstrators in Country's Capital - Photo, Video
12:39 GMTPETA Launches Fake Store Touting 'Human Leather Goods,' Slams Urban Outfitters
12:33 GMTResidents of Indian City Perform 'Pothole Worship' in Sign of Protest - Video
12:09 GMTUK Competition Regulator Orders Facebook to Sell GIF Sharing Platform Giphy
12:08 GMTCristiano Ronaldo Calls Ballon d'Or Chief ‘Liar’ For Claiming His ‘Ambition’ is to Outrival Messi
12:06 GMTRussia Will Soon Have New Hypersonic Missile With Maximum Speed of Mach 9, Putin Says
12:04 GMTChina Hopes WHO-Led Treaty on Future Pandemics Will Not Be Politicized, Beijing Says
11:57 GMT'Michael Flynn' Alleges CIA Could Be Behind 'Total Nonsense' QAnon Conspiracy Theory in Leaked Audio
11:55 GMTPeople With Blood Groups A, B and Rh+ ‘More Susceptible’ to COVID-19 Infection, Study Finds
11:40 GMTLavrov Says NATO Military Equipment Being Moved to Russian Border
11:18 GMTMigrant Camp Reportedly Being Torn Down by French Police Amid Simmering UK-France Channel Row
11:15 GMTFrench Pundit Eric Zemmour Announces Presidential Bid
11:15 GMTMicrosoft CEO Satya Nadella Sells Half His Shares in Company
11:09 GMTTrump's 'Fact-Free' Approach Posed Great Challenge to Presidential Intel Briefings, CIA Says
11:00 GMTUK Measures to Tackle Omicron Variant 'Proportionate and Responsible', PM Johnson Says
10:57 GMTIndian Opposition Parties Storm Out of Parliament, Demand 12 Lawmakers' Suspension be Revoked
10:32 GMTIstanbul Airports Suspend Flights due to Hurricane - Airline
10:31 GMTRussia Detects Over 50 NATO Reconnaissance Aircraft Near Borders Weekly
10:16 GMTAndrew Cuomo Accuser Blasts CNN Host as Part of 'System' Shielding Powerful Men From Accountability