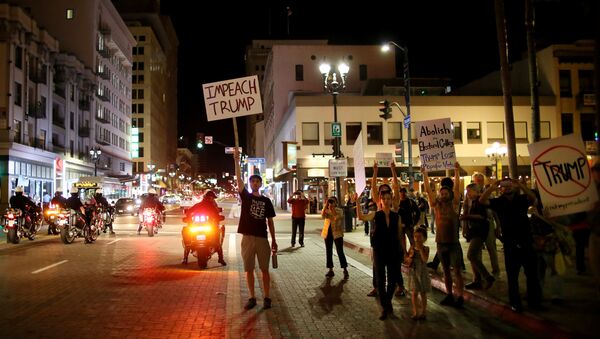 The heads of California's upper and lower parliamentary chambers have called the results of Tuesday's US presidential vote, in which US Republican Donald Trump was elected, inconsistent with state values.

People Take to Streets in Washington DC to Decry Presidential Election Results
MOSCOW (Sputnik) – Trump won the 2016 election with 290 electoral votes to become successor of President Barack Obama. The US president-elect will take office at the inauguration on January 20. His Democratic rival Hillary Clinton received 232 votes despite winning the popular vote by a margin of over 200,000, according to CNN analysis.

"Today, we woke up feeling like strangers in a foreign land, because yesterday Americans expressed their views on a pluralistic and democratic society that are clearly inconsistent with the values of the people of California," California Senate President pro Tempore Kevin de Leon and California Assembly Speaker Anthony Rendon, both Democratic politicians, said in a joint statement on Wednesday.

California, the most populated US state with the largest economy, voted for Clinton by almost two-thirds.

The state must defend progress and prevent a rollback into the past, the statement asserted, adding that the potential impact of a Trump presidency will be assessed by local officials.

"While Donald Trump may have won the presidency, he hasn’t changed our values. America is greater than any one man or party. We will not be dragged back into the past. We will lead the resistance to any effort that would shred our social fabric or our Constitution," the statement, published in both English and Spanish, said.

California is home to a sizable Latin community which makes up almost 40 percent of its population, according to US Census Bureau figures.

During his campaign, Trump repeated vowed to fight illegal migration from Mexico and Latin America into the United States and proposed building a wall of the US-Mexican border.