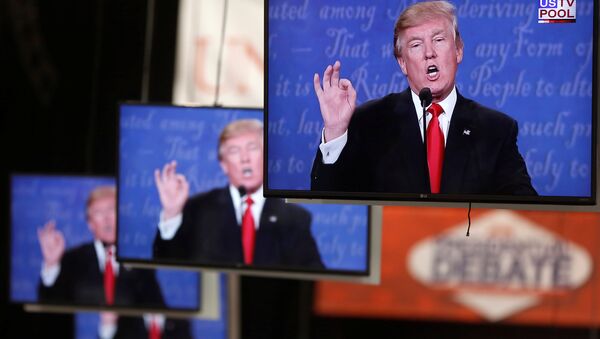 Neil Clark
All materials
Former MP George Galloway, had predicted a Trump win as far back as May 2016, as he had correctly predicted a "Leave" vote in the UK's EU referendum. But the "experts" in the US and UK mainstream media (MSM) - incidentally, often the same "experts" who told us Iraq had weapons of mass destruction in 2003 - knew better than our George.

Galloway summed it up perfectly in one tweet, as it became clear that Donald J. Trump, against all the odds, was to become the 45th President of the United States of America:

There was no way the unspeakably awful Donald Trump would prevail, the MSM assured us. A victory for the quite wonderful Hillary Clinton was a slam dunk. After all, everyone in our circle is going to vote for her!

Bill Kristol, the editor of the neocon Weekly Standard and a regular pundit on US television, scoffed at the idea that Trump would even win a single caucus or primary.

Sticking with my prediction: Trump will win no caucuses or primaries, and will run behind Ron Paul 2012 in IA and NH.

"Here's why Donald Trump won't win the Republican nomination" was the title of one piece in August 2015.

Then there's the pollsters.

Not a single poll ever showed Trump winning in Wisconsin. Ever. https://t.co/hI49J0OEuB

In the last few days, almost all the polls showed significant leads for Hillary Clinton.

Surely, after this latest debacle, no one can trust pollsters ever again.

Politicians too, with the exception of outside-the-tent populists like George Galloway and Nigel Farage, demonstrated how out of touch they were with public opinion.

"Trump is underperforming so comprehensively… it would take video evidence of a smiling Hillary drowning a litter of puppies while terrorists surrounded her with chants of 'Death to America,' " was the verdict of an Iowa Republican.

Well, guess what, that video evidence of Clinton as Cruella de Vil did not emerge, and The Donald still won.

Throughout the summer we also had dire warnings in the US MSM that Trump was leading the GOP into oblivion.

Well, the Republicans now have the Presidency, the Senate and the House.

As with Brexit "experts" in the US and UK, who are paid good money to "enlighten" us on political trends, didn't see the US election result coming.

What Are the Odds? Big Bucks at the Bookies as US Election Bets Heat Up in UK
A plethora of articles appeared assuring us that "Trump can't win/Trump won't win." The fact that lots of people turned up at Trump's rallies proved nothing, opined the same "experts" who told us that the large crowds at Jeremy Corbyn rallies didn't mean anything either.

One London punter had the good sense to disregard these wise and learned articles.

The mutually back-slapping "pundits" who told us Trump couldn't win, met the "shock" result on the morning of November 9 with incredulity, anger — and in some cases four-letter profanities.

"Just woke up. Jesus H Christ, America. What the f*** just done. You should be ashamed of yourselves."

The fact that ordinary US voters are being scolded by UK and US punditocracy for voting the "wrong way" shows us the massive disconnect between large sections of the MSM in both countries and the people.

Financial Markets Bias Exposed After Trump Win
Well-heeled media commentators, many of whom attended the same universities, seem dumbfounded that people who are not so well-off and not so privileged, don't see things in the same way as they do.

How many of those who pontificated on the US elections — and gave their "expert" opinions on how Trump couldn't possibly win — have actually spent any time in the "Rust Belt" or the poorest states of the deep south, or ever engaged with working-class Americans, struggling to make ends meet?

If they had, they might just have anticipated what happened on election day. But they were all too busy massaging each other's egos on Twitter and predicting the result that they wanted to see, to hear the cries for change coming from the despised ‘little people', and whose opinions were ignored by  Establishment "experts" once again.