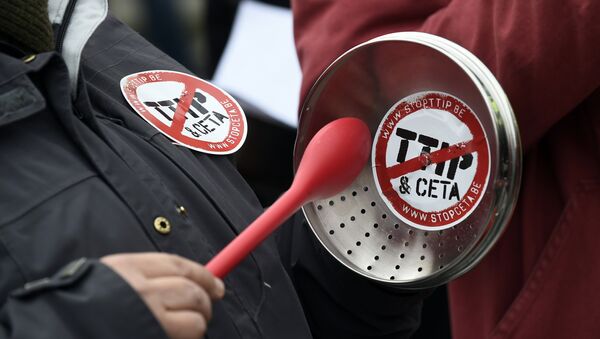 Brussels is desperately fighting to keep alive hopes of the controversial Transatlantic Trade and Investment Partnership (TTIP) EU-US trade deal being agreed, in the face of opposition to the dying deal from newly-elected US President Donald Trump, Sputnik has been told.

Trump to Take 'Tough Line' on US-China Trade Relations, Likely to Kill TPP
Trump has made clear that he is passionately opposed to free trade agreements, which — in his opinion — work against US citizens by opening up home markets to foreign workers and non-tariff trading. He is opposed to the North American Free Trade Agreement (NAFTA) between the US, Canada and Mexico, because he blames it for a loss of the US manufacturing industry.

He has pledged to stymie both Trans-Pacific Partnership (TPP) trade deal — a broad agreement that included Mexico, Brunei, Chile, New Zealand, Singapore, Australia, Canada, Japan, Malaysia, Mexico, Peru, the United States, and Vietnam (but not China) — as well as TTIP.

"Donald Trump's victory in the US presidential elections spell bad news for TTIP, which was already in its death throes — EU leaders are well aware of this, as was made clear by a letter from EU Council president Donald Tusk and President of the European Commission which offers Trump 'sincere congratulations' and a plea for an EU-US summit 'at his earliest convenience,' " UK-based War on Want's senior trade campaigner, Mark Dearn, told Sputnik.

Congratulations @realDonaldTrump. Only by cooperating closely can EU&US continue to make a difference in dealing w/ unprecedented challenges pic.twitter.com/6ic39caqiB

​The Presidents of the European Council and Commission, Donald Tusk and Jean-Claude Juncker, issued a swift overture to the US President-elect in an effort to keep their dreams of a US-EU trade deal alive, saying: "on the TTIP — we should spare no effort to ensure that the ties that bind us remain strong and durable."

Groups campaigning against TTIP have distanced themselves from much of Trump's rhetoric, despite his opposition to trade agreements.

"Trump has benefited hugely from the same neoliberal policies that underpin corporate trade deals while shamefully placing the blame for the inequality they have unleashed onto people of colour and migrants," Dearn told Sputnik.

.@nickdearden75 on why #Trump can only be beaten by a fairer economy and a better society https://t.co/sIDdtZ31lb pic.twitter.com/RKWd6HV4hb

​"There has been a huge movement against TTIP on both sides of the Atlantic. Over 3.5 million Europeans have registered their opposition to this attempted corporate coup, and in the summer of this year the deal was declared dead by most trade experts," Guy Taylor, trade campaigner from Global Justice Now told Sputnik.

"The defeat of TTIP was very much one of progressive people power and nothing to do with Trump and his divisive politics of hate." 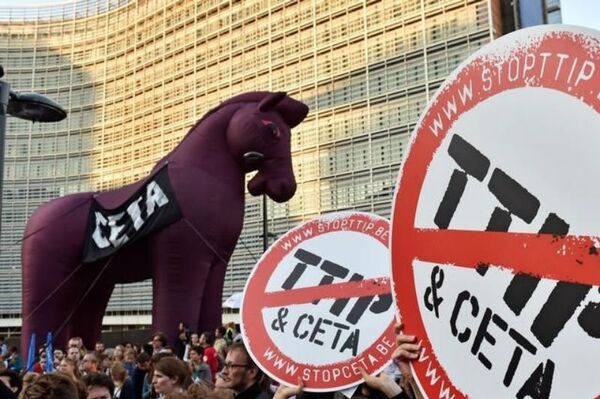 Thousands of people demonstrate against the Transatlantic Trade and Investment Partnership (TTIP) and the EU-Canada Comprehensive Economic and Trade Agreement (CETA) in the centre of Brussels, Belgium September 20, 2016
© REUTERS / Eric Vidal

Dr. Gina Yannitell Reinhardt PhD., lecturer with permanence at the Department of Government at Britain's University of Essex told Sputnik that Trump will inevitably face opposition to his stance on trade deals, but may get his way in the end.

"I think that it's more likely that his effects will be on enforcing tariffs, creating other barriers for entry of foreign goods and people. That will have an effect on trade. He can't unilaterally repeal NAFTA, any more than he can unilaterally repeal the Affordable Care Act [the reform of US health services, known as Obamacare]. But, if he gets enough people on his side, then he will accomplish quite a bit in eliminating those programs," she told Sputnik.

But will that have an effect of the yet-to-be-ratified TTIP deal, which has drawn growing hostility within Europe?

"Yes, in the sense that — if he has enough legislators on his side — they will be bolstered in their opposition to it. It's up to Congress to ratify TTIP and to approve it. If Congress ratifies it, then he would have to veto it and — if he exercises his veto over and over again- it's going to start problems. It could mean that TTIP will fall apart — at least with US participation in it," Dr. Reinhardt told Sputnik.