Markets Bounce Back After Trump Win, Despite 'Rejection of Economic Status Quo' 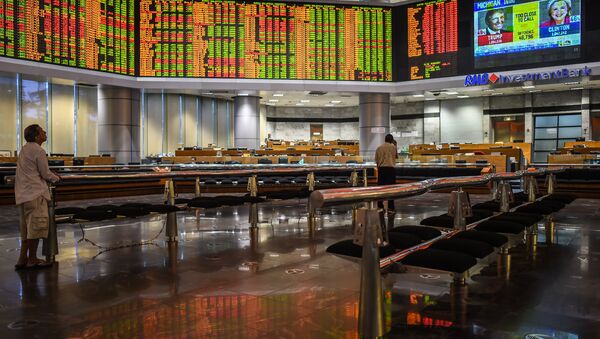 Donald Trump's Key Statements on Foreign Policy
Donald Trump's victory in the US presidential elections came as a shock to world markets, which appear to have recovered after an initial dip.

As news of Trump's victory came through on Tuesday evening, the US Nasdaq stock exchange declined by 4.4 percent, the Dow Jones by 3.7 percent and the S&P 500 by 4.4 percent.

However, all the indexes showed gains of between 1.1 and 1.4 percent on Wednesday, a sign that markets are getting used to the idea of President Trump, who gave a conciliatory victory speech.

Fujito Norihiro, a senior investment strategist at Tokyo's Mitsubishi UFJ Morgan Stanley Securities, said that many investors' early reaction to Trump's victory was the panicked sale of securities and emerging-market currencies, in favor of gold, sovereign bonds and the Japanese yen.

"Investors were confronted with an unexpected situation which required the avoidance of risk," Norihiro said.

Among investors' concerns are Trump's pre-election pledges to pursue a protectionist economic and foreign policy, including building a wall along the border with the country's third largest trading partner, Mexico.

Trump is opposed to free trade deals such as the Trans-Pacific Partnership and Transatlantic Trade and Investment Partnership, and wants to impose more tariffs on foreign-produced goods in the hope of stimulating jobs for Americans.

"In general, the election results in the US show that voters reject the political and economic status-quo, including the dominant tendency of the last few decades towards removing trade barriers in world trade," Krichevsky said.

Mainstream Media 'Still in Denial of What Happened to Them' After Trump Win
"America voted against monstrous social stratification, against countless Wall Street experiments which put the welfare of tens of millions of Americans at the mercy of stock market speculators."

"America voted against an economic model in which production leaves the country, the owners of production are exempt from tax on income made outside the US, and their own people lose their jobs and become marginalized."

Voting for Trump, US citizens wanted to take back control of their country from an unstable global economic system, Krichevsky said.

"America voted against economic dependence on the outside world, according to which the existence of a stable society is directly proportional to the quality of political and economic sentiment in third countries."

000000
Popular comments
The foolish plebeians of this world so desperately want to believe in positive change that they see a hero in Trump, despite all facts proving he is the opposite. This election has more than ever before proven the effectiveness of TV in controlling people's thoughts. When he enters office we can expect some positive change to strengthen the cloak of the oligarchs, but within a year or two betrayal will be undeniable.
anton
10 November 2016, 15:17 GMT
000000
Newsfeed
0
New firstOld first
loader
LIVE
Заголовок открываемого материала
Access to the chat has been blocked for violating the rules . You will be able to participate again through:∞. If you do not agree with the blocking, please use the feedback form
The discussion is closed. You can participate in the discussion within 24 hours after the publication of the article.
To participate in the discussion
log in or register
loader
Chats
Заголовок открываемого материала
Worldwide
InternationalEnglishEnglishMundoEspañolSpanish
Europe
DeutschlandDeutschGermanFranceFrançaisFrenchΕλλάδαΕλληνικάGreekItaliaItalianoItalianČeská republikaČeštinaCzechPolskaPolskiPolishСрбиjаСрпскиSerbianLatvijaLatviešuLatvianLietuvaLietuviųLithuanianMoldovaMoldoveneascăMoldavianБеларусьБеларускiBelarusian
Transcaucasia
ԱրմենիաՀայերենArmenianАҧсныАҧсышәалаAbkhazХуссар ИрыстонИронауОssetianსაქართველოქართულიGeorgianAzərbaycanАzərbaycancaAzerbaijani
Middle East
Sputnik عربيArabicArabicTürkiyeTürkçeTurkishSputnik ایرانPersianPersianSputnik افغانستانDariDari
Central Asia
ҚазақстанҚазақ тіліKazakhКыргызстанКыргызчаKyrgyzOʻzbekistonЎзбекчаUzbekТоҷикистонТоҷикӣTajik
East & Southeast Asia
Việt NamTiếng ViệtVietnamese日本日本語Japanese中国中文Chinese
South America
BrasilPortuguêsPortuguese
NewsfeedBreaking
06:03 GMTMyanmar's Aung San Suu Kyi Reportedly Sentenced to Four Years in Prison
05:43 GMTDanish Professor Says Omicron to Become Dominant Strain Amid 'Worrying' Increase in Cases
05:37 GMTUS Intel Resorting to 'Unprecedented Sharing' to Convince EU of Russian 'Invasion' Plans in Ukraine
05:02 GMT'I Am Sorry of Course': Danish PM Apologises for Shopping Maskless
04:57 GMTLive Updates: Vaccine Creator Warns Next Virus Could be 'More Lethal' Than COVID
04:55 GMTUS Condemns Deadly Attack on Civilians in Mali
04:45 GMTCNN Host Chris Cuomo Fired Over Allegations of Sexual Misconduct, Attorney Says
04:34 GMTTwo Infants Hospitalised in Brazil After Getting Pfizer Shots by Mistake, Reports Say
04:08 GMTOmar Confident Speaker Pelosi Will Take Action Against Boebert's Anti-Muslim Remarks
04:01 GMTFrom Photo-Ops to Afghan Withdrawal: Trump & Milley's Most High-Profile Spats
03:59 GMTGraphic Design: The Chilling Art of a School Shooter
02:54 GMTDemocrats' Anti-Trump Playbook Could Be a Losing Strategy for 2022 Midterm Elections
01:44 GMTBiden White House to Reportedly Announce Diplomatic Boycott of Beijing Olympics
01:07 GMTGambia’s Incumbent Leader Wins Presidential Election - IEC
00:31 GMTOmicron Mitigation: What Travellers to the US Need to Know Beginning Monday
YesterdayFauci Speechless After US Senator Asserts Epidemiologist 'Overhyped' COVID-19 Pandemic
YesterdayFrench Presidential Candidate Zemmour Attacked at Villepinte Rally - Reports
YesterdayTrump Slams Top US General Milley as 'F**king Idiot' Over Afghanistan Withdrawal
YesterdayWWII Veteran And Longtime US Senator Bob Dole Dies at 98
YesterdayIran Blames US Stubbornness on Sanctions for Breakdown of Vienna Nuke Talks