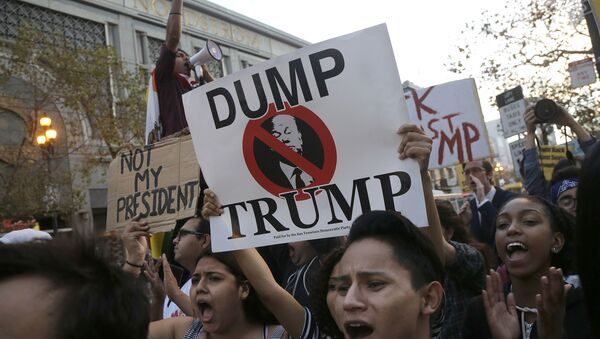 A large rush of high school students in San Francisco have walked out of their classes and marched down Market Street in protest of President-elect Donald Trump.

Market is the major street that goes through the city and the business district. Students from at least ten schools are now gathering in front of the San Francisco City Hall in protest.

Thousands of students in the Bay Area also walked out of classes on Wednesday, chanting "not my president." Walk outs also took place in Seattle, Pheonix, Pittsburgh, Portland, Boulder, and others.

“Donald Trump may be president, but we are going to make sure that this man, that he is going to prioritize the well being of the people, so please join us in this fight,” an unidentified student said during yesterday's protest, CBS News reported.

“He wants us to turn against each other,” a female student fighting back tears told the large crowd. “I just want to emphasize that as young people it’s our job to continue to fight like our parents fought for us.”

During yesterday's walk outs, Berkeley Unified School District spokesman Charles Burress said that the district would prefer their students to be in class and participating, but that they "understand their concern and take it very seriously when they feel passionate about political issues." He continued on to assert that the district is "doing everything they can to support them."

When asked how long they expect to continue protesting, several demonstrators asserted that they will keep protesting "the entire four years of Trump's presidency."

In Washington, DC, a small group of young protesters had also gathered outside the Trump International Hotel. The protesters say that they are Georgetown Day School students — and that school administrators gave them excused absences to go protest, Kevin Lewis of ABC tweeted.