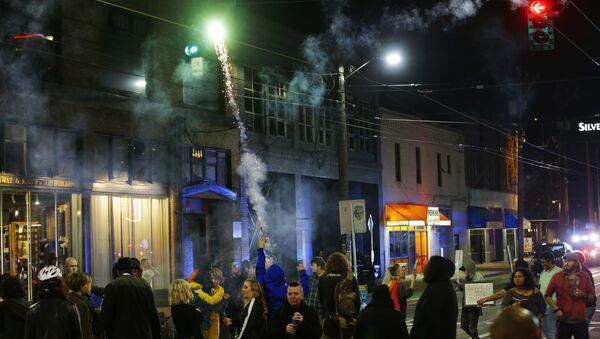 Five people have been injured in shooting in Seattle, Washington, as hundreds of people took to the streets to protest US Republican candidate Donald Trump's victory in 2016 US Election, the city's fire department reported. ​Two persons have reportedly been inflicted with life-threatening wounds.

​The shooting took place at Pine Street and 3 Avenue. According to the Seattle Times, the anti-Trump march was simultaneously proceeding down "nearby streets."

Police have arrived at the scene, the newpaper noted, without specifying whether the shooting is related to the ongoing rally.

Q 13 Fox news outlet reported that shooting is not related to the anti-Trump demonstartion.

DEVOLVING: Seattle fire responding to a possible shooting at 3rd and Pine. This is NOT related to the anti-Trump protest. pic.twitter.com/rs78GlDLJU

Seattle police reported of multiple victims in the incident, promising to release more details "as they become available."

​​Assistant Chief Robert Merner of the Seattle Police Department told reporters that the shooting is not related to the demonstration, adding that one of the wounded is in  in critical condition.

"Not believed to be related to the protest at all," Merner said late on Wednesday, adding that "personal argument of some sort" caused the incident.

Merner said that the suspect is unidentified male who managed "escape on foot," despite police arrived at the scene in "less than a minute."

"Too early to tell if it was drug related," he added.

According to the police spokesman, innocent bystanders, who were not related to the argument and who were waiting for the bus, were likely among those injured in the shooting. The investigation into the incident is underway.