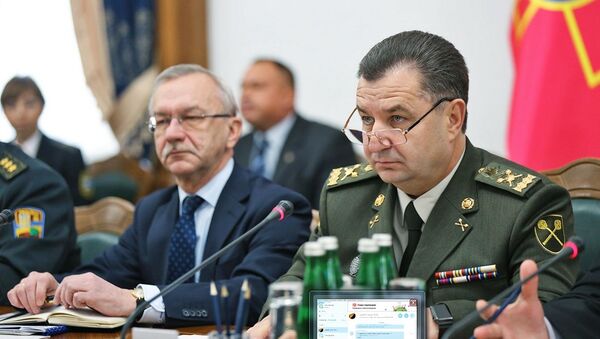 NATO 'strategic advisors' from the US, the UK, Canada and Lithuania arrived in Ukraine on Tuesday as part of an ongoing effort to reorganize Ukraine's military to alliance standards. However, Kiev's acknowledgement that the advisors also "discussed the situation in the east of Ukraine" has observers concerned.

Ukrainian Defense Minister Stepan Poltorak met with the advisors on Tuesday. According to a Ministry press release, the meeting was devoted to "proceeding to the practical stage of work" between NATO strategists and the Ukrainian Armed Forces. Poltarok stressed that alliance advice and assistance at all levels was crucial, and that advisors would soon be meeting with the heads of the Defense Ministry reform subcommittees.

Group of Foreign Advisers Starts Working in Ukraine's Defense Ministry
Worryingly, the Defense Minister also confirmed that the two sides "discussed the situation in eastern Ukraine." That region has been embroiled in a civil war since April 2014, when Kiev moved its army into the Donbass, where local residents came out in opposition to the Maidan coup d'état in February of that year. Locals quickly formed militia units, and the two sides fought a fratricidal war against one another until February 2015, when they agreed to a ceasefire deal in talks brokered by Russia, France, Germany and Ukraine in the Belarusian capital of Minsk.

A shaky ceasefire has been in place ever since, although violations are regularly reported. Kiev has been criticized for refusing to adhere to the Minsk peace plan by insisting that its provisions can be fulfilled out of order. Leaders of the self-proclaimed Donbass republics, meanwhile, say that the agreement's thirteen points must be implemented in the order they were agreed to.

It remains unclear what exactly the NATO advisors' tasks will be in the Donbass, given the unstable situation there, but Kiev's guests assured their hosts that they have "a lot of ideas on the exchange of experience and the development of bilateral relations."

Observers have described the advisors' presence and their focus on the situation in the Donbass as "alarming," adding that these NATO officials could "advise President Poroshenko to repeat the 2008 Georgian scenario in the Donets Basin," i.e. to restart the war in the east.

NATO Drills Promote Georgia's Revanchism, Undermine Stability - S Ossetia
NATO and Ukraine have several agreements on the provision of assistance to modernize the country's military, but this is the first time in recent memory that officials publically admitted to strategic discussions at a senior level regarding the conflict in Donbass. Before that, since 2014, when Kiev gave up its non-aligned status, Ukraine's Armed Forces have hosted NATO advisors in the country's western and central regions with regularity.

Asked whether the NATO mission is an indication that Kiev is considering new military designs on Donbass, Russian political scientist Vladimir Zharikhin responded by underscoring that the mission, led by the United States, is part of an outgoing administration in Washington.

"The situation has changed somewhat after elections in the US," the expert explained. "Secondly, the problem with the Ukrainian military is not that there is a lack of trained generals and officers. They are trained well enough, many of them graduates of Soviet military academies. The main problem is that the army does not feel that it is fighting for a just cause. And here no advice will be able to help – especially from retired generals and admirals who for many years fought with little apparent success in Iraq and Afghanistan."

Denial, Frustration, Outrage: Kiev Having Trouble Dealing with Trump Victory
As for the prospect of advisers being used to plan a new round of military action in the Donbass, Zharikhin suggested that it is probably (and thankfully) too late for this scenario. "In early October, I was really concerned that this might happen. There were fears that the Clinton team, if it felt that it was losing the race, might try to repeat the trick used by John McCain, who during the 2008 presidential rate attempted to turn the tables against Obama through military adventurism in Georgia. For three weeks McCain polled ahead of Obama on a wave of anti-Russian feeling."

But considering Clinton's electoral defeat, and the presence of OSCE peacekeepers in Donbass (making it difficult to pin any aggression on the Donbass republics), Zharikhin noted that it's unlikely Kiev will renew any military offensive. "In the next six months, the Trump administration will be working to figure out the situation," he said. "I don't want to say that he is a 'peace dove', but he will be working to understand what's what. Only after that will he begin any steps in one direction or another."