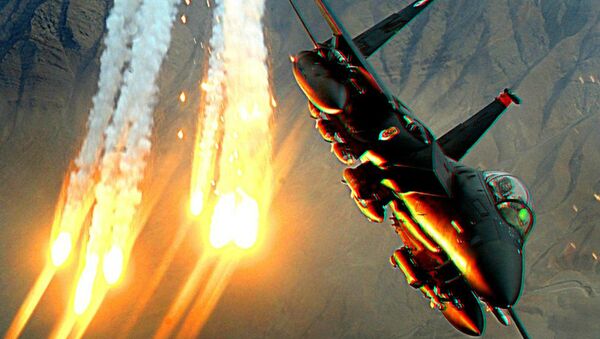 On Tuesday, Donald Trump became America's 45th president-elect after a long and grueling campaign against opponent Hillary Clinton. Clinton had threatened to create a no-fly zone over Syria – something top generals warned might mean war with Russia. Trump, meanwhile, has repeatedly promised to cooperate with Russia in the fight against terrorism.

Speaking to Radio Sputnik, Dr. Rohan Gunaratna, the head of the International Center for Political Violence and Terrorism Research at Singapore's Nanyang Technological University, stressed that there was no doubt in his mind that Mr. Trump would live up to this campaign promise.

Explaining that US foreign policy is very likely to face a kind of "restructuring" in the coming months, Gunaratna recalled that Trump has shown himself to be "very open to working closely with a broader range of partners to meet the world's threats. For instance, there is no president – no [other] leader who has called out repeatedly that he will work with Russia."

Therefore, Gunaratna suggested that there is "no doubt that Putin and Trump will work together to fight [Daesh], to fight al-Qaeda, and to fight other immediate and long-term threats that are common to these two nations."

Lavrov: Russia Hopes Relations With US to Recover After Trump's Election
The analyst believes that "the geopolitical and the superpower rivalry" of recent years has compromised global security to the point where "a lot of the conflicts that are taking place could have been resolved by the world much earlier." Thankfully, he added, the world now seems to be moving toward a situation where there is "a greater willingness on the part of leaders to work across the divide for a common goal."

"I personally believe that the Russians and Americans can work together to dismantle [Daesh] infrastructure, not only in Raqqah in Syria, but elsewhere" as well, Gunaratna stressed. Pointing to the effectiveness of the Russian anti-terror operation in Syria, and that of the US in Iraq, the analyst suggested that if the two countries could somehow combine forces, they could create a "synergy" that would dramatically improve the effectiveness of both campaigns.

At the same time, admitting that certain US allies, including Saudi Arabia and Qatar, were largely responsible for the rise of Daesh and al-Qaeda terror in the first place, Gunaratna noted that it remains crucial to try and work with, influence and enhance the capabilities of Middle Eastern governments "so that they themselves will fight terrorism at home. Certainly in the past there has been ignorance, neglect, and terrorist groups grew, and were harbored. But I think real power is working together with the Europeans, with the Middle East, and with the Russians."

Trump's Election: 'We May Have Just Dodged the Bullet on WWIII'
As far as the US-European security relationship is concerned, the counterterrorism specialist said that he believes that the US and Europe are likely to remain close allies, since their relationship is based on a long, common history. "But I also believe that this relationship is being reviewed at this point, and unless there is commitment to work together, this relationship will not persist…"

NATO too may not survive in its present form, according to Gunaratna, because the alliance has failed to meet the real threats facing its members in an adequate way. "I think that the last five years have clearly demonstrated that NATO could not meet the challenges to secure Europe and to be relevant to the post-Cold War, post-Daesh environment – that is, the period after June of 2014, when the so-called Islamic State was proclaimed." Ultimately, the analyst suggested that NATO will be fundamentally restructured, if it is to survive.