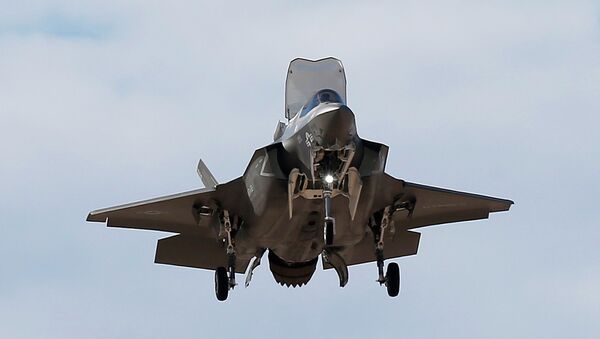 © AP Photo / Ross D. Franklin
Subscribe
An air crew on board the USS America dismantled an F-35B fighter plane and reassembled it to prove that the 5th generation craft could sustain repairs while at sea. A labor-intensive, week-long engine and power module swap also took place, a maintenance task that is the first of its kind, according to officials.

Amphibious ships like the America tend to be less spacious than aircraft carriers, making it important to assure that maintenance workers can complete complicated tasks within tight quarters. According to the Navy site, the swap was assisted by the Marine Operational Test and Evaluation Squadron 1, of Yuma, Arizona.

The F-35 Patuxent River Integrated Task Force’s maintenance and logistics department head, Mark Schroeder, said in a statement, "Any time [the Navy or Marine Corps] acquire new aircraft, they are concurrently going to acquire the training resources that it takes to operate and maintain the jet," according to the Navy site.

"Marine maintainers who come to work on the F-35B have typically transferred out of an AV-8B Harrier or F/A-18 Hornet squadron as those aircraft wind down and migrate out of the fleet. The people here now will be the ones to bring the new generation of aircraft to the Marine Corps."

Maintenance teams documented each step of the swap by entering every move into the F-35’s maintenance software, called Autonomic Logistic Information System (ALIS).

Lt. Col. Richard Rusnok, detachment officer-in-charge of the VMX-1 F-35B, said, "Testing the ability to swap entire engines or engine components at sea is vital, as this is the last opportunity for the Marine Corps to perform these shipboard maintenance actions in a sterile test environment before they deploy with the F-35B in 2018. During this short-term deployment, the team not only proved the engine maintenance construct, but also gained critical hands-on experience dealing with the confined space and deck motion aboard ship, something that cannot be replicated ashore."

Sea testing will continue for another week on the seven F-35Bs on board the USS America. The final round of tests are slated to wrap up just before VMFA-121, the F-35B’s first operational squadron, deploys permanently to Japan aboard the USS Pacific.

The supersonic stealth aircraft kicked off the final phase of testing this week about 125 nautical miles out from San Diego, as Marines observed how the F-35B executes vertical landings and short takeoffs in choppy waters.

Andrew Maack, site director of the F-35’s naval variants at Patuxent River, Maryland, told Business Insider, "There are smoother places that we could be, but we are actually looking for increased deck motion so we asked for the ship to be here for the purpose of it being a little bit more challenging envelope for the airplane."