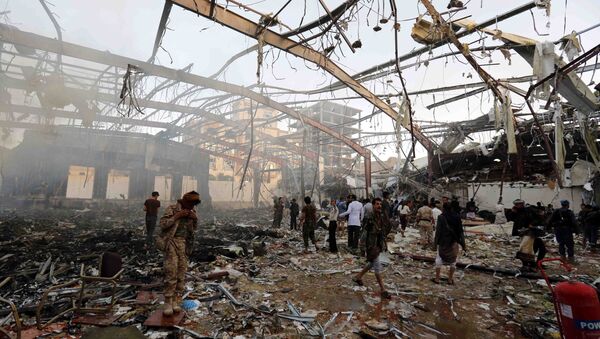 © AP Photo / Osamah Abdulrhman
Subscribe
US Vice President Joe Biden and the sultan of Oman, Qaboos bin Said al-Said, agreed during a phone call to have their countries work together in advancing regional stability amid the conflict in Yemen, the White House said in a press release.

Two Paths to Bring Yemeni Bloodbath to an End
WASHINGTON (Sputnik) — Biden thanked the sultan for his efforts toward reducing regional tensions and advancing a political settlement in Yemen, the release added.

“Both leaders reaffirmed their commitment to the enduring bilateral partnership, to include deepening economic engagement, and agreed to continue close cooperation between the United States and the Sultanate of Oman to advance regional peace and stability,” the release on Thursday’s call explained.

Yemen has been engulfed in a violent conflict between the government of President Abd Rabbuh Mansur Hadi and the Houthi movement, also known as Ansar Allah, which is backed by army units loyal to former president Ali Abdullah Saleh.