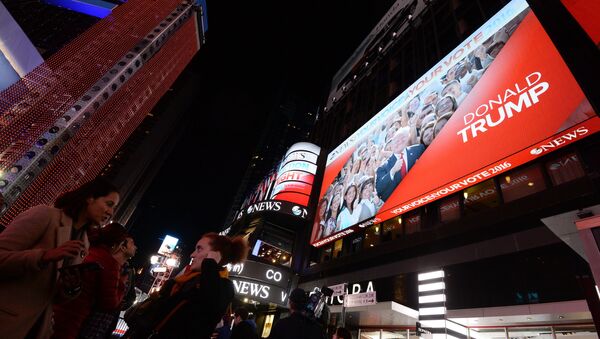 The United States will enter a new era of no longer pursuing the foreign policy of “expensive and counterproductive” regime-change in other states, in case US President-elect Donald Trump lives up to his promises, Ron Paul Institute for Peace and Prosperity Executive Director Daniel McAdams told Sputnik.

Trump’s Victory Proves US Political Class Out of Touch With Electorate
WASHINGTON (Sputnik) – In his victory speech earlier in the day, Trump pledged that under his administration, the United States would have good relations with all states willing to cooperate with Washington.

“If President Trump can live up to this promise by president-elect Trump, we might look forward to a new era in the United States where we can end the enormously expensive and counterproductive foreign policy of regime-change, destabilization, bullying, and bombing,” McAdams said.

According to McAdams, should Washington start getting along with the other countries instead of “seeking to rule the rest of the world,” the United States will become “a freer and safer nation.”

The Republican candidate triumphed over his Democratic challenger, Hillary Clinton, in the November 8 presidential election. He gained 276 electoral votes, which is more than 270 needed to win. Clinton has reportedly called to concede her defeat.

The greatest danger for the United States in the wake of Republican Donald Trump being elected the new president is that neoconservative politicians may gain positions in his administration and continue Washington’s “interventionist” foreign policy, Ron Paul Institute for Peace and Prosperity Executive Director Daniel McAdams said.

"The greatest danger is that Washington's neocon establishment, most of which opposed Donald Trump from the beginning, will now seek to gain positions of power in a new Trump Administration, from where they can continue the interventionist foreign policy of the last several US presidents," McAdams said.

McAdams compared such politicians to chameleons and said that they "are changing their colors as we speak.