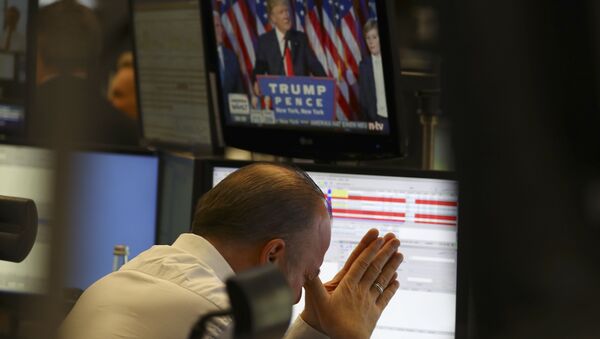 © REUTERS / Kai Pfaffenbach
Subscribe
Another election, another erosion in pollsters credibility or that's what many headlines would have us believe. However, UK's leading elections expert, Professor John Curtice, told Sputnik that the signs that Clinton may lose were there for all to see, but that many pundits and market analysts, chose to rely on their own instinctive bias.

Trump: The Biggest Upset in Political Betting History
On Tuesday, November 8, the US' day of political reckoning, nearly every national US poll put Mrs. Clinton narrowly ahead of Mr. Trump.

However, in US politics, it's not the national share of the vote that counts, but the electoral college points, in which highly populated states like Florida and California, are worth more votes than sparsely populated states like Montana. Here, the pollsters were more cautious. In many of these so-called battle ground states, Clinton's predicted lead was minuscule.

Nonetheless, the reliance of the international media on national polls, which estimated that the world would wake up to a Clinton presidency on Wednesday, November 9, morning, has meant that her opponents victory has been met with widespread criticism of pollsters. The consequences have not just meant the largest political upset in generations, but also that markets took a dive — indicating that they had been banking on a Clinton win.

US'S BREXIT LESSON: Trump said the polls were biased against him. His claims, dismissed & mocked by media & experts – turned out to be true.

In the early hours of Wednesday morning, futures in the S&P and Dow Jones Industrial dropped 5% and more than 800 points, respectively.

However, later into Wednesday, markets stabilized surprisingly fast. The UK's FTSE 100 index, which had initially dropped 2% at the start of trading, recovered quickly to show a gain by the afternoon.

The markets are a bit calmer now, after the initial selloff around Trump's win https://t.co/FociXxGyta pic.twitter.com/Q0iAaUmtp5

Professor John Curtice is a leading UK psephologist — an expert on the statistical study of elections and voting trends.

He told Sputnik that some of the criticism against pollsters is unfounded and that the fact that investors backed Mrs. Clinton, is itself telling.

"We now know who the markets wanted to win. And there is a natural human tendency to take on board the evidence that agrees with what they want and hope to happen and ignores the contrary evidence," Professor Curtice.

"From the very beginning we said we're not sure who's going to win, they said that all the way from December 2015 and certainly by the end that was a very clear message from the polls. There were some polls that said 'oh no' this person is going to win, and people focused on that and said they must surely be right.

Brexit was a useful template for ignoring polls but a poor template for the market's reaction to Trump's victory https://t.co/5o56CuNmtW pic.twitter.com/uMkT7OkyrM

Professor Curtice also pointed to the last US election to highlight his point that this year's result actually means a smaller margin of error than in the recent past.

"The average error in presidential polls in the US over the past six years has been about two points, so kind of scale of error is not uncommon," Professor Curtice told Sputnik.

Professor Curtice said that Trump's win is not on the same scale of an upset as this year's Brexit referendum — in which the Remain camp was widely predicted to win the day — and the UK 2015 general election — in which the Conservative party was predicted to suffer big losses. The Conservatives in fact gained a majority, freeing them from the need to stay in a coalition with the Liberal Democrats.

"Clinton, as we speak, is slightly ahead in the popular vote… The polls on average pointed to her being around two points ahead in the popular vote, so yes the polls had Clinton too high, but that is smaller than the Brexit referendum polling, which was four points wrong in the lead UK general election was seven point mistake in the lead, so this is much smaller error," Professor Curtice told Sputnik.

As Mrs. Clinton licks her wounds, perhaps her campaign staff are ruminating on the fact that Mr. Trump repeatedly defied the polls during the Republican primary season.

Indeed, even if pollsters did not get their predictions as wrong as many pundits are claiming, the fact remains that on Tuesday morning, the odds were not in Trump's favor.

On Wednesday, the US woke to an unexpected rejection of the status quo. A political realignment has taken place. For all those who had written off Donald Trump, choosing to find validation of their personal preferences in tight polling data, all bets are off. So begins four years of President Trump.