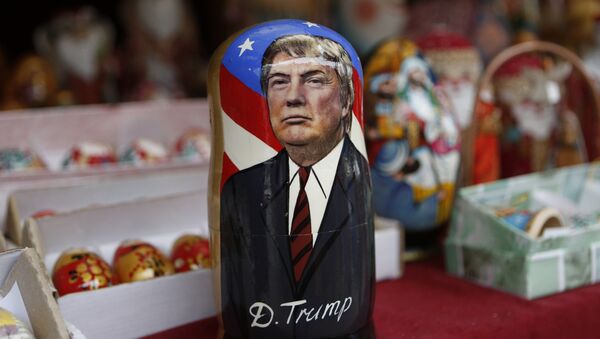 On Tuesday, Donald Trump became the 45th president-elect of the United States. The news sent shockwaves around the world. Russia's president congratulated Trump on his victory, and voiced his hope that the two countries could work to overcome the crisis in US-Russia relations. Officials in Kiev, meanwhile, have been left frustrated and subdued.

Putin Congratulates Trump on Victory in US Presidential Election - Kremlin
After securing his victory, Trump was congratulated by leaders from around the world. President Putin sent the president-elect an official telegram, wishing him success in taking on the serious task of being head of state. Later on Wednesday, Putin reiterated again that Moscow is prepared to restore full-fledged relations with the US.

Indian Prime Minister Narendra Modi offered his own congratulations, thanking Trump for "the friendship [he] articulated toward India" and saying that Delhi "look[s] forward to working with you closely to take India-US bilateral ties to a new height."

Hungarian Prime Minister Viktor Orban, meanwhile, wrote on Facebook that the election result was "great news," and an indication that "democracy is still alive."

But in Kiev, things are more subdued. President Petro Poroshenko's official Twitter account, regularly bursting with commentary on political news, remained silent until 2:30 in the afternoon, when he curtly congratulated Trump with victory, and said that he hoped Washington would continue to provide Kiev with support.

China's Xi to Trump: I Hope We Will Step Up 'Mutually Beneficial Cooperation'
He also enraged Kiev by admitting that he might partially revoke anti-Russian sanctions. This summer, he also annoyed Kiev's backers in the US mainstream media by insisting to ABC's George Stephanopoulos that Russia was not going to invade Ukraine, despite repeated (and baseless) accusations to the contrary. In September, he made headlines again by refusing to meet President Petro Poroshenko in New York, citing 'scheduling issues'.

During the long and grueling presidential race, Kiev attempted to actively intervene in the race in favor of Hillary Clinton. Kiev officials provided the Clinton campaign with a 'secret ledger' meant to smear former Trump campaign manager Paul Manafort.

Accordingly, Ukrainian officials have every reason to be jittery over Trump's victory. For the reasons, it's necessary to take a quick look back at recent history.

The current authorities came to power in February 2014 as a result of what Moscow has described as a US and EU-supported coup d'état, following months of protests resulting from Kiev's refusal to sign an Association Agreement with Brussels. On the US side, the coup was supported by US Assistant Secretary of State Victoria Nuland, a key Clinton ally. Nuland and US Ambassador to Ukraine Geoffrey Pyatt were famously implicated in hand-picking the future Ukrainian government in a leaked telephone conversation that went viral during the crisis.

European Parliament Vice President Warns Against Trump's Vilification
The crisis in Ukraine ultimately resulted in a breakdown in relations between the West and Russia, with the US and its European allies condemning Russia and even accusing it of 'invading' Ukraine, while providing direct assistance to their new-found client state in Kiev. In April 2014, the Ukrainian military moved into the country's east to quell opposition to the new authorities in Kiev, resulting in the outbreak of a bloody civil war. Again, Kiev and its Western backers blamed Russia.

Trump, if he fulfills his election promises, seems set to change at least some of that. How exactly a Russian-US rapprochement might actually looks remains a mystery, and one that officials in Kiev don't seem enthusiastic about finding out the answer to.

Entering damage control in an attempt to preempt any hysterical speculation, US Ambassador to Ukraine Maria Yovanovitch assured Kiev Wednesday that "no matter who becomes the US commander in chief, in the transition period between administrations and in the new administration, the United States will remain a strong partner of Ukraine."

Ukrainian Ambassador to the US Valeriy Chaly tried similar verbal acrobatics, insisting that Trump was not a threat to Ukraine. Actually, he said, the fact that many 'friends of Ukraine' in Congress had retained their seats was perhaps more significant than Trump's election, since "a lot of congressmen and senators continue to support Ukraine," and the new administration will be forced to find a certain balance with Congress.

Not everyone is so optimistic. Verkhovna Rada deputy speaker Oksana Syroyid warned that Trump's victory "will affect foreign policy more than anything." Here, she said, Trump's 'inadequate' perception of Russia "will reflect on Ukraine in an unambiguous way." Ultimately, she stressed that while the details of Trump's policy toward Ukraine have yet to be fleshed out, the fact that he has repeatedly spoken positively of Russia is "not a very good sign for Ukraine."

Trump's Victory in US Elections Opens Up Period of Uncertainty - Hollande
For his part, Dmitry Shimkiv, deputy head of the Ukraine's presidential administration, also voiced concern, telling Ukrainian television that Kiev will have to work harder in influencing the US's system of levers and counterweights, ostensibly to offset any 'problems' caused by the Trump White House.

Ukrainian media has also gone into overdrive hoping against hope that Trump doesn't change Washington's policy toward Kiev. Speaking to Ukrainian television, political scientist Sergei Tolstov explained that Trump's foreign policy team will have to work very hard to "prepare him" for the role of leader of the free world, "because right now he is totally unprepared" to be president.

Trump's policy, according to Tolstov, will depend largely on the groups within the Republican Party that he will depend on for support and which will become part of his administration.

The analyst admitted that Kiev would have preferred a Clinton victory, pointing out that she had pondered appointing Vice President Joe Biden, a key proponent of Washington's Ukraine policy, as her Secretary of State. Clinton, he wistfully added, had promised that she would continue sanctions against Moscow, and was "not ready to compromise with Putin."

Syrian Nun Welcomes Trump's Presidency Due to Positions on Syria, Russia
Bohdan Yaremenko, political expert and former diplomat, was more frank, warning that US "resolve and resources to assist others in the international arena have been reduced. The focus has shifted to China, the Pacific and the Middle East…US financial and political resources are needed for Kiev to survive, but the struggle to access them has become more competitive. The real question today is what we can do to convince the new president and the establishment about the necessity to help us and not someone else."

According to Ukraine's Vesti online newspaper, Trump may "sacrifice" Ukraine's leaders for the sake of stabilizing relations with Russia. This, the paper warned, may include forcing Ukraine to carry out the Minsk agreements on restoring peace in the Donbass, as well as trimming financial assistance to the country, resulting in further economic decline and "perturbations" for the Ukrainian government.

Finally, Ukrainian political analyst Ruslan Bortnik offered perhaps the most outspoken prediction, saying that Trump's ability to come to some sort of agreement on the division of regional influence with Putin may result in US's gradual withdrawal from Ukraine, which will become a neutral state.

"But even if the two men cannot come to an agreement, Trump's victory means a change in Ukraine's political elite," Bortnik stressed. "Poroshenko and his team have done a great deal to try and bring Trump down. They launched the scandal around Paul Manafort…accusing him of corruption and practically forcing Trump to remove him as campaign manager. Trump will not forget this. Even if he does not come to an agreement with Russia, his election will mean the replacement of one group of pro-Western ruling elites in Ukraine with another."