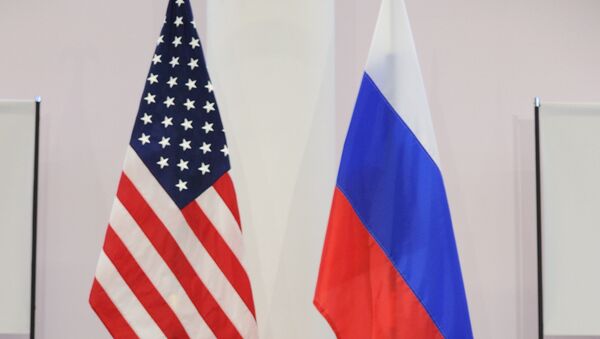 © AFP 2021 / ALEXANDER NEMENOV
Subscribe
The normalization of the US-Russian relations, promised by the newly-elected US President Donald Trump during the election campaign, would be beneficial for the situation in Europe and worldwide, as well as would decrease the anti-Russian paranoia, a French senator told Sputnik on Wednesday.

MOSCOW (Sputnik) — Earlier in the day, Trump won the US presidential elections despite most of the analysts and opinion polls predicting his defeat to Clinton. Trump got 279 electoral votes against Clinton's 228 votes, more than 270 needed to win.

"If Trump renews and improves relations between Russia and the United States in accordance with his campaign promises, it would have positive impact on the situation in the world and in Europe, where it would stop at least to some extent anti-Russian paranoia," Yves Pozzo di Borgo said.

Talking about Trump’s pledges to decrease US financing of NATO, Di Borgo, who is also the member of the Committee on Foreign Affairs and Defense Committee, said Europe should play a greater role in the issue of European security, as well as develop NATO in the way to lessen its dependence on the United States.

Trump's Victory Shows US People Tired of Wars – Serbian President
He also added that Trump’s victory "wasn't something impossible," as the US citizens were tired of the Washington elite circle, a member of which was Democratic Party nominee Hilary Clinton.

Since 2014, relations between Russia and the United States deteriorated amid the crisis in Ukraine. Washington and its allies have introduced several rounds of anti-Russia sanctions over Moscow's alleged involvement in the Ukrainian conflict, which the Kremlin has denied.