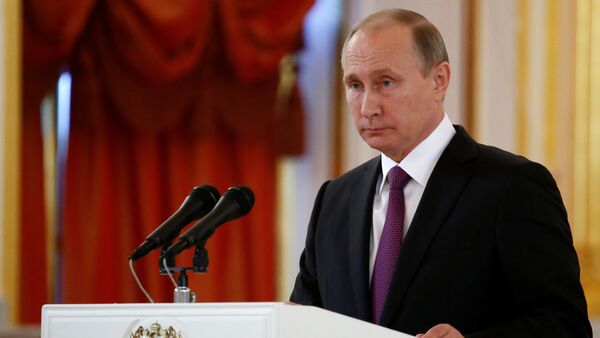 © REUTERS / Sergei Karpukhin
Subscribe
President Vladimir Putin received credentials from ambassadors to Russia and commented on the results of the US presidential election.

Augean Stables: 45th US President Trump Has to Deal With Obama's Legacy
The Russian leader said Moscow was ready to do its outmost to return relations with Washington on the trajectory of sustainable development. Restoring the ties would not be easy, but Russia is ready to follow its course, he said.

"We heard election campaign statements by the US presidential candidate, which were aimed to restore relations between Russia and the United States. We are aware that this will be a difficult path, with account for degradation the Russia-US relations have unfortunately faced," Putin said.

"It is not our fault that the Russian-US ties are in such a state," he said. "But Russia is ready and wants to restore full-format relations with the United States. We are proceeding from the assumption that it will not be an easy path, but we are ready to complete our part of it."

Putin said that people from both Russia and the US would benefit from better relations. They would also improve the global climate.

"We are ready to do everything to bring back Russian-US relations on a sustainable development path. This would benefit both the Russian and the US people and would positively impact the overall climate in global affairs, given the particular responsibilities of Russia and the US in maintaining global stability and security," Putin said.

Russia promotes the launch of intra-Syrian dialogue in light of the common agreement that a political solution is the only course toward conflict resolution, Vladimir Putin said at the credentials presenting ceremony.

"Together with the interested countries, Russia promotes the launch of intra-Syrian dialogue. We believe the the solution to the Syrian conflict must be political. It is the only way to stop the bloodshed, to ensure the return of millions of refugees, to revive the economy and the social sector of the country," Putin said.

The world's ability to jointly combat terrorism and face other security challenges is being determined in Syria, Putin said.

"By and large, the international community's ability and willingness to join forces and together confront the terrorist threat common to us all is being determined on Syrian soil, as well as to adequately respond to other challenges to global security and stability," the president said.

Relations between Russia and Poland can hardly be called satisfactory, but restoration of political dialogue is possible, and Moscow is ready for that, Putin said.

"Mr. Ambassador: we know that the state of Russian-Polish relations can hardly be called satisfactory today. At the same time, we believe restoration of political dialogue is only possible on the basis of mutual respect and pragmatism," Putin said addressing Poland's new ambassador to Russia, Wlodzimierz Marciniak.