‘Most Hated Lawman in the US’: Arpaio Kicked Out of Office by Arizona Voters 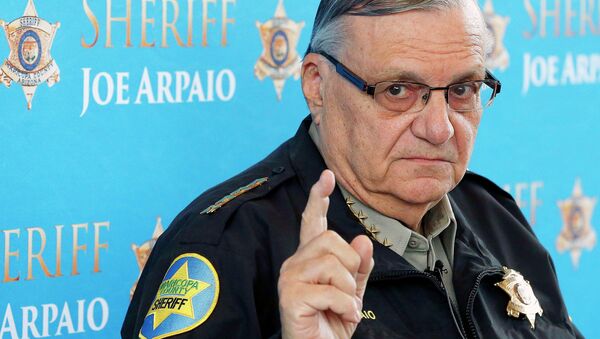 Trump Tops Clinton in Arizona, Texas; US Candidates Deadlocked in Georgia
Arpaio, who has been sheriff since 1993, was defeated in his bid for a seventh term, by a roughly 10-point margin. The winner, Penzone, has stated that he hopes to rebuild the reputation of law enforcement. He was endorsed by many of the largest newspapers in the state.

Over the years, Arpaio, who refers to himself as "America's Toughest Sheriff,” has been accused of a slew of corruption allegations, including discriminatory police conduct, abuse of power, misusing funds, racial profiling, improper clearance of cases, failing to investigate sex crimes, unlawful enforcement of immigration laws, and even election law violations.

Arpaio famously led an investigation into US President Barack Obama’s birth certificate, and continues to claim to this day that it is a forgery and that he is not American.

“We want to congratulate Paul Penzone on his victory and look forward to working with him on a seamless transition,” Arpaio said in a statement. “My thanks and appreciation to the people of Maricopa County for the faith and trust they put in me over the years.

Controversial Arizona Sheriff May Face Jail Time Over Repeated Racial Profiling
“I am also tremendously grateful for the hard work and dedication of every employee of my office. Their selfless and tireless dedication in protecting and serving the people is to be greatly admired.”

Penzone’s run against Arpaio was largely funded by George Soros’ influential political action committee, which contributed millions of dollars, local station KTAR reported. The majority of Arpaio’s donations came from groups that were from outside of Arizona.

Arpaio is currently charged with criminal contempt, for ignoring a judge’s order in a racial-profiling case. He is accused of not complying with orders to cease his immigration patrols, which were found to be in violation of laws regarding the civil rights of Arizona’s hispanic population.

Arpaio claimed that the case is an “abuse of power” that was brought on by the Obama Administration to interfere with his bid for re-election.