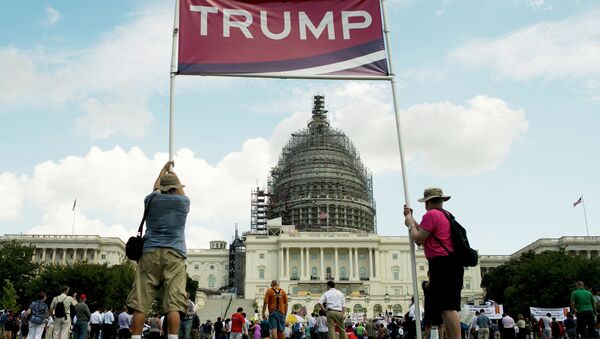 The Republican Party, also called the Grand Old Party, is one of the two major US political parties along with the Democratic Party. The party's name aluudes to the belief of putting republican interests above local ones, promoted by the nation’s third president, Thomas Jefferson.

FACTBOX: US Presidential Elections Procedure
MOSCOW (Sputnik) — The Party was founded on February 28, 1854, in Ripon, Wisconsin, in the wake of the public movement against slavery. The founders of the party were members of the Whig Party, democrats and freesoilers who opposed slavery.  The first Republican convention was held in June 1856 in Philadelphia, Pennsylvania, which nominated the first Republican presidential candidate, John Frémont, who won a majority in 11 states.

The struggle between the Republican and Democratic parties reflected the contradiction between the free market relations developing in the North and the slavery system of the South. In its early years, the Republican Party had especially strong support in the northeastern states. Abraham Lincoln, a Republican candidate, became the US president by winning the 1860 presidential race in 18 states. The Republican Party’s platform for the election advocated a ban on slavery, imposing a high protective tariff on imported goods, and free granting of unoccupied lands in the West.

Lincoln’s victory in the 1860 election signaled secession for the southern states, which triggered the 1861-65 Civil War. The war ended with the defeat of the slave-owning South and brought about political domination of the Republican Party that was in power from 1861 through 1885 (Abraham Lincoln, Andrew Johnson, Ulysses Grant, Rutherford Hayes, James Garfield, Chester Arthur), in 1889-93 (Benjamin Harrison), in 1897-1913 (William McKinley, Theodore Roosevelt, William Howard Taft), and in 1921-33 (Warren Harding, Calvin Coolidge, Herbert Hoover). The Republicans won 14 out of 18 presidential elections in 1860-1932, with supported from the North and Midwest farmers’ alliance and big business. The Republican economic policy after the Civil War was based on low taxes, strong currency, and limited government interference in the economy.

US Republican Presidential Candidate Donald John Trump
In 1912, the party split into the progressive wing, headed by Theodore Roosevelt, and the conservative wing, led by William Taft. The schism resulted in Democrat Woodrow Wilson winning the presidential election in that year.

The Republican Party supported the women’s rights movement. In 1920, the 19th Amendment to the Constitution was adopted, guaranteeing women the right to vote. In the 20th century, the Republicans were viewed as conservatives and champions of the traditional American values. They remained committed to the isolationism policy longer than their rivals, and they also opposed greater involvement of the state in economic life and a comprehensive social security system for the population. The inability of the Republicans to counter the Great Depression led to their losing power in 1933.

In 1952, Republican Dwight Eisenhower was elected president. Under his presidency, the party’s platform remained conservative with an emphasis on anti-Communism, restricted involvement of the government in the economy and cutting taxes.

In 1968, President Richard Nixon launched the policy of détente to deescalate international tensions and took steps to end the Vietnam War. He was re-elected for a new term in 1972 but had to resign in 1974 following the Watergate scandal.

Republican US Vice-President Candidate Mike Pence
After Barry Goldwater’s defeat in the 1964 election, Ronald Reagan became the leader of the conservative wing in the Republican Party. He won the presidential elections twice, in 1980 and 1984. The Reagan administration’s economic policy was called Reaganomics, which targeted inflation and unemployment. Reagan’s foreign policy was anti-Communist. However, although in the first years of his term in office Reagan saw the Soviet Union as an “evil empire,” in 1987-88 the atmosphere of Soviet-US relations changed remarkably.

In 1988, George Bush, vice president under Reagan, won the presidential election. Even though Bush made significant achievements in foreign policy, he failed to do as much at home. In 1992, the party suffered a humiliating defeat, losing to the Democrats the White House and both houses of Congress. The Republicans won Congress back in 1994, gaining the majority for the first time in 40 years (53 seats out of 100 in the Senate and 230 out of 435 in the House of Representatives). The party renewed its control over Congress thanks to the Contract With America platform proposed by the Republican leader in the House of Representatives Newt Gingrich. However, they failed to live up to the “contract,” which helped Democrat Bill Clinton to defeat Bob Dole in the 1996 election.

In 2000, George W. Bush barely won the most intense and controversial US presidential election. He repeated his success four years later. As president, Bush pursued a policy of tax cuts and increased funding for education and defense. Following the September 11, 2001 terrorist attacks, the US president’s priorities shifted toward ensuring better security inside the US and the fight against international terrorism. As part of this fight, Bush launched military operations in Afghanistan in October 2001 and in Iraq in March 2003.

The Republican Party traditionally has the greatest influence in the north-east, Midwest and the West of the country.

The Republican Party does not have a permanent membership, platform or charter. The main political document expressing the party’s political credo is the election platform adopted by the national conventions ahead of each election.

Trump: FBI Move Not to Prosecute Clinton for Emails Makes US 'Laughing Stock'
The ideological composition of the party is mixed and encompasses a large spectrum of political ideas and views. The symbol of the party is an elephant.

The current activities of the party are supervised by the National Committee. It has been chaired by Reince Priebus since January 14, 2011, who won reelection in 2013 and 2015, and is serving the longest term in modern history. The National Committee is headquartered in Washington, D.C.

The supreme body of the Republican Party is the national convention, which is held every four years. It has a special role not only in the election (formally, it is the convention that nominates presidential hopefuls), but also in the nation’s political life, as the convention adopts the party’s political platform. Preparations for the Congressional elections are conducted by the party’s election committees in the Senate and the House of Representatives: the National Republican Congressional Committee (NRCC) and the National Republican Senatorial Committee (NRSC). The committee’s activities are directed at expanding the party’s representation in Congress. They support candidates in terms of budget planning, complying with election legislation, funding, researching, and working out a strategy.