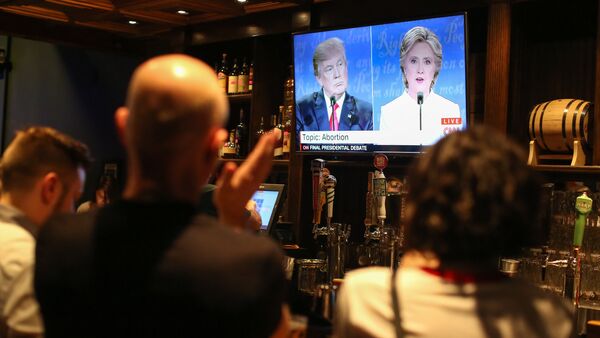 Voting in the US presidential elections is going smoothly, and logistics at the polling stations are impressive given US citizens' high enthusiasm and long lines even in early morning hours, an international observer at the Georgetown Community Library polling station in Washington, DC told Sputnik.

WASHINGTON (Sputnik) — As early as at 6.00 a.m. EST [11.00 GMT], one hour before the station opened, the line of US nationals eager to vote was far beyond the library's fence.

"Everything is going on smoothly. This polling station opened around 7 a.m. EST [12.00 GMT], you can see a long line of people waiting to vote, you can see also enthusiasm, though it's very early in the morning," Francisco Guerrero, an observer from the Organization of American States (OAS) and Secretary for Strengthening of Democracy, said.

Guerrero specified that the OAS would monitor the voting process throughout the day and present a preliminary report with conclusions on November 9, and a full one later on.

"I have to recognize that in logistical terms, it's quiet impressive. I think it corresponds to the high American standards," he added.

Trump's Ex-Advisor Files Complaint to OSCE on Election Norms Breaches by Clinton
The Organization of American States has been observing elections since 1960s, and it has almost 240 missions across the continent. This is the first time that OAS observes are in the United States, at the invitation from the US government.

"We have 41 observers in 13 states. They come from 18 various countries. At this polling station, there is one Mexican, one Costa Rican, one Argentinian, one Colombian and one Peruvian," Guerrero said, adding that he himself observed the last presidential election in Russia in 2012.

Voting in the United States is underway, the polling stations will be closing from 6.00 to 8.00 p.m. EST [01.00 GMT]. The major candidates are considered to be Hillary Clinton from the Democratic Party and Republican nominee Donald Trump.