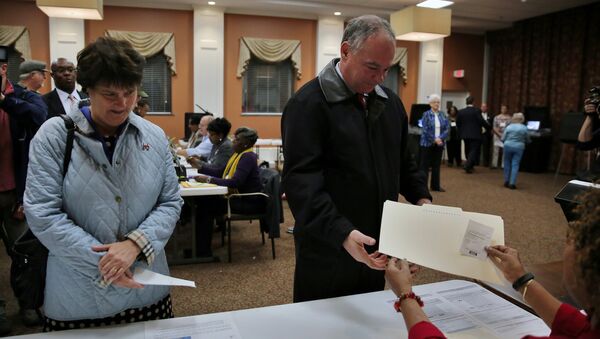 The nominee made a short speech right after.

The southeastern state of Virginia, where four out of the first five US presidents were born, has 13 electoral votes.

The state’s 8.3-million population is comprised of multiple racial and ethnic groups, including 62.7 percent of non-Hispanic whites (their share declined by almost 15 percent in 1990-2015), 19.7 percent of African Americans, 9 percent of Latino Americans and 6.5 percent of Asian people.

Although in 1952-2004, Virginia consistently voted for the Republican candidates (with exceptions in 1964, when Lyndon Johnson won against Barry Goldwater). However, in 2008 and 2012 Barack Obama topped local elections with 7- and 4-point margins against Republicans John McCain and Mitt Romney.

According to the Real Clear Politics average of national polls, Republican presidential nominee Donald Trump was trailing Clinton in Virginia by over 5 percent (48.3 percent versus 43.0 percent). In Presidential primary elections in Virginia Trump gathered 355,960 votes (34.7 percent of the Republican ballots, won the primaries) while Clinton received 503,358 votes (64.3 percent of the Democratic ballots).