Voting in 2016 US Presidential Election Gets Underway in Vermont 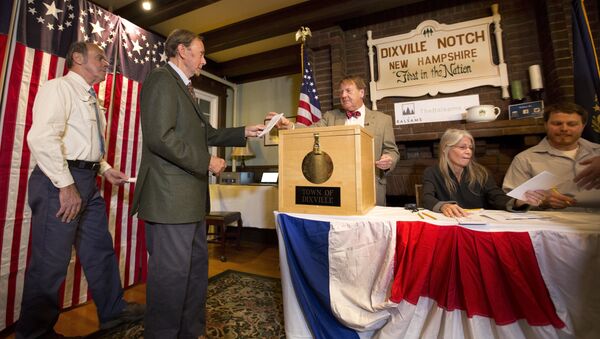 Voting for the 45th president of the United States began Tuesday at 5 a.m. EST (10:00 GMT) with a number of polling stations opening their doors in some cities across the state of Vermont.

WASHINGTON (Sputnik) — Balloting is also set to get underway soon in other states of the US Northeast, including New Hampshire, New York, Virginia, Maine and New Jersey.

The country’s 58th quadrennial election for president features Republican Party nominee Donald Trump against Democrat Hillary Clinton, as well as minor-party and independent candidates such as the Libertarian Party’s Gary Johnson, Jill Stein of the Green Party and independent Evan McMullin, who is on the ballot in only 11 states.

Kremlin Tracking US Presidential Election Just Like Any Major Event
Nationwide voting is conducted every biannually — including non-presidential-year races for Congress — on the Tuesday following the first Monday in November. This year, polls will begin closing as of 6 p.m. EST, with the last voting — in western Alaska — scheduled to conclude at 1 a.m. EST on Wednesday.

Results, however, are expected to begin coming in around 6 p.m. EST from Indiana and Kentucky.

Election Day is a civic holiday in a few states, including Delaware and New Jersey, while in others some employers give workers time off to vote.

President Barack Obama’s second term will officially end at noon EST on January 20, 2017, whereupon the winner of Tuesday’s election will be sworn into office.