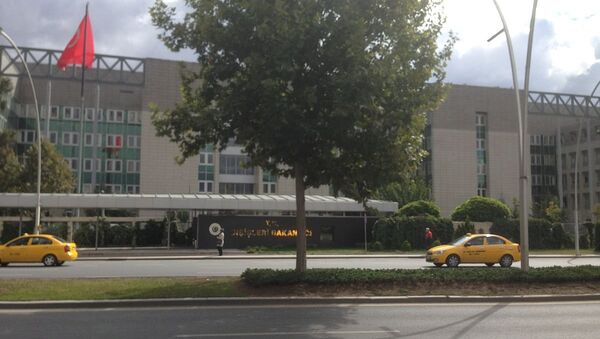 The Turkish Foreign Ministry on Tuesday accused Luxembourg of supporting terrorism in response to its foreign minister's suggestion to sanction Ankara over its crackdown on opposition.

Berlin Abstains From Discussions of Sanctions Against Turkey
ANKARA (Sputnik) – In an interview published Monday, Luxembourg's Foreign Minister Jean Asselborn said that Turkey’s economic dependence on the European Union could be used to turn up the pressure on Ankara to stop its "Nazi" practices of ostracizing tens of thousands of alleged opposition members and journalists.

"We condemn the statement by the Jean Asselborn, the foreign minister of Luxembourg, which is one of the main European countries that support terrorism. In an interview with Deutschlandfunk, he made attacks against Turkey, which is serious cause for concern. Statements by the foreign minister of a country whose contribution to the fight against global terrorism is questionable indicate that he is far from understanding the scale and nature of the threats posed to Turkey," the foreign ministry's press secretary Huseyin Muftuoglu said in a statement.

He stressed that Turkey expects all countries to denounce the attempted coup which took place in Turkey on July 16.

Following the coup attempt, thousands of people, mostly officials, legal and educational workers, were detained or dismissed over alleged ties to the putsch organizers. The European Union spoke out against what it perceived as multiple cases of human rights abuse by the Turkish government.

Turkish authorities have also mounted a crackdown against pro-Kurdish politicians. Earlier in November, a number of Peoples’ Democratic Party (HDP) members were arrested over alleged links to the Kurdistan Workers’ Party (PKK), which Turkey considers terrorist. The move was made possible after the Turkish parliament voted to strip lawmakers of parliamentary immunity in May.