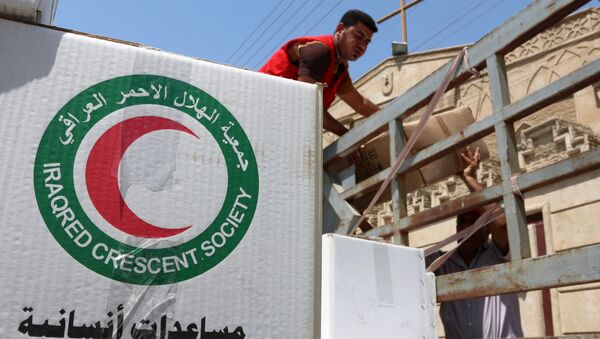 According to a senior official, International Committee of the Red Cross (ICRC) is ready for any developments in the Iraqi city of Mosul, where it has had no meaningful contacts with the Daesh jihadist group.

ICRC to Negotiate With Warring Parties in Mosul, Including Daesh, Access to City
GENEVA (Sputnik) – The International Committee of the Red Cross (ICRC) is ready for any developments in the Iraqi city of Mosul, where it has had no meaningful contacts with the Daesh jihadist group, a senior Red Cross official told Sputnik.

"Recently we didn't get any meaningful contact with the Islamic State group inside. Two years ago, we were able to send some medical supplies to some hospitals inside Mosul, but unfortunately this was not possible on a regular basis," ICRC regional director for the Middle East Robert Mardini said.

"Unfortunately, this is a challenge we have ahead of us. We are prepared [for] all the scenarios, because it is very difficult to predict one specific scenario," Mardini said, adding that the ICRC's contingency plans allow for humanitarian aid in extreme situations.

The International Committee of the Red Cross has no objective sources of information on developments in Mosul since the military campaign to retake the Iraqi city from the Daesh jihadist group, a senior Red Cross official said.

"Today we don't have this type of contact inside Mosul, it's extremely difficult, it's closed. We don't have any objective source of information inside Mosul," ICRC regional director for the Middle East Robert Mardini said.

The humanitarian situation in Mosul, Iraq has the potential to be worse than the crisis in Aleppo, Syria, official told Sputnik.

"It has the potential. It will depend on how the Daesh group and the belligerent wage the warfare inside. There is potential for massive humanitarian needs," ICRC regional director for the Middle East Robert Mardini said when asked to compare the two.

ICRC could expand its $128-million budget on Iraq next year taking into account the ongoing military operation in Mosul, a senior ICRC said.

"Iraq is our third largest operation. Our budget for next year is 125 million Swiss franc [$128 million]. Of course, depending on how the situation in Mosul will develop, we might come up with budget exceptions with our donors," ICRC regional director for the Middle East Robert Mardini.

He added that the ICRC's preliminary appeal added nearly $18 million to face "the first wave of displacements" with medical supplies and household essentials.

"As we don't know how the future will be made of, we will continue to adjust our response and we might need additional resources in order to respond to the specific situation in relation to Mosul," Mardini stated.

The ongoing military campaign in Mosul could sharply drive up internally displaced numbers in Iraq, a senior International Committee of the Red Cross official added.

"We have to be prepared [for] any of the scenarios. What is absolutely critical, if there is displacement, to make sure that people are screened by the authorities with safeguards, respecting dignified conditions for people that are screened in a fast way, effective way," he added.