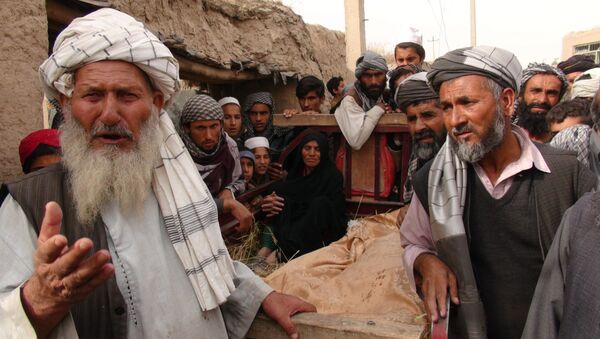 © Sputnik
Subscribe
International
India
Africa
A special Afghan government commission continues to investigate the US-led airstrikes that killed more than 30 people, including women and children, in the province of Kunduz last week.

The US-led airstrikes was carried out near the village of Buz-e Qandaghari in Afghanistan's Kunduz province on November 4 as US and Afghan troops clashed with the Taliban.

In an interview with Sputnik Dari, Afghan Defense Ministry spokesman Davlat Vaziri pointed the finger at the Taliban militants, who he said "used their homes as human shields."

He said that 30 Taliban militants were killed in the airstrikes, including ten field commanders.  Vaziri admitted the civilian deaths during the raid, expressing regret about the tragedy.

"If as a result of our military operations, God forbid, the civilian population is suffering, we realize our mistakes and learn from them so that they can never happen again in the future," according to Vaziri.

"Yes, we admit the civilian casualties who were citizens of Afghanistan and who died as martyrs. The Afghan Defense Ministry expresses its regret over it. I assure once again that we will draw lessons from what has happened," he said.

Asia
Afghanistan Taliban Opens New Propaganda Offensive Against Kabul
He claimed that there are allegedly negative and positive aspects related to the deadly airstrikes. "We see both pros and cons [concerning the airstrikes]," he said.

"We have destroyed the most dangerous Taliban warlords, who masterminded numerous attacks in Kunduz province. We obtained information that they planned a new attack on the city of Kunduz," Vaziri said.

He added that the November 4 airstrikes targeted the Taliban's headquarters in Kunduz, where the militants' children also lived.

Vaziri said that those children were killed in the airstrikes and that they were included in the civilian death toll because he said the Taliban militants' children are seen as shaheeds, or martyrs. 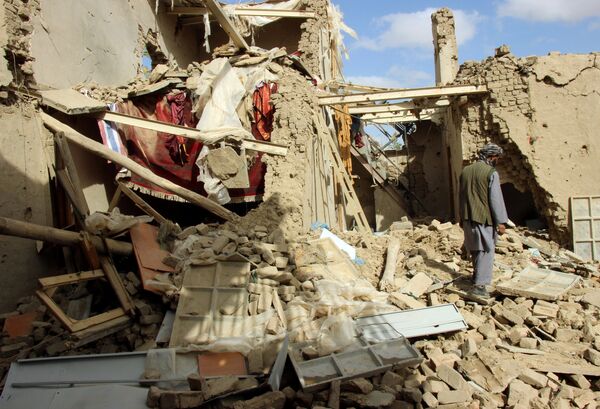 An Afghan man inspects a house destroyed during an air strike called in to protect Afghan and U.S. forces during a raid on suspected Taliban militants, in Kunduz, Afghanistan. file photo
© REUTERS / Nasir Wakif

Meanwhile, mass protest rallies have been held in the city of Kunduz, with participants demanding the punishment of those responsible for the death of innocent people.

According to the demonstrators, the airstrikes targeted houses located at least a hundred meters away from the Taliban's headquarters.

Protesters demanded that the authorities wrap up the investigation and make public its results by Thursday, otherwise the nearby motorways will be blocked.

One Year On: US Bombing of MSF Hospital in Kunduz Remembered
Earlier, Vaziri held a meeting with the elders of the tribes in the province of Kunduz, during which he pledged a meticulous and unbiased investigation in the deadly November 4 airstrikes.

He said that if the inquiry finds local officials' guilt in the airstrikes, they will be brought to justice.  The results of the probe will be put on the table of the Afghan President, who is due to take a final decision on the matter, according to Vaziri.

Afghanistan is in the grips of political and social turmoil, with government forces fighting the ongoing Taliban insurgency. The instability has persisted in the country since the 2001 US-led invasion to defeat the Taliban and al-Qaeda in the wake of the 9/11 attacks in the United States.